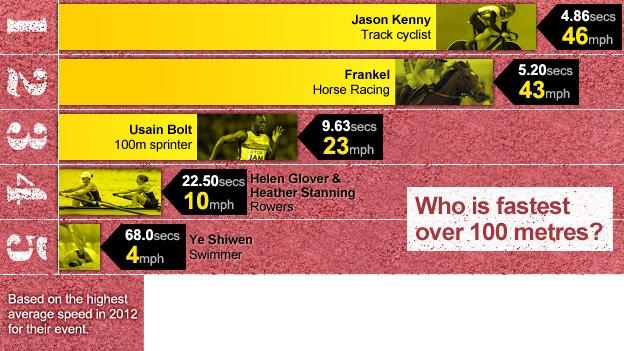 Frankel is the world's top-rated racehorse who has been called the equine version of champion sprinter Usain Bolt.

The four-year-old, trained in Newmarket by Sir Henry Cecil, ended his career unbeaten after he clinched a 14th win in the Champion Stakes at Ascot.

All 32,000 tickets for British Champions Day, which featured the £100m colt's final fling, sold out weeks ago.

Here we look at his background, anatomy, fascinating facts, what people say about him and analyse what makes the horse so special.

Frankel is the son of 2001 Epsom Derby winner Galileo, a leading stallion, and Kind who won six races during her career.

He was born on 11 February, 2008, and was named after the legendary American trainer Bobby Frankel, who died in November 2009.

Bobby's daughter Bethenny Frankel is a reality TV celebrity in the United States, with more than a million Twitter followers, although she has spoken of a strained relationship with her father.

The horse was sent to 10-time champion trainer Sir Henry Cecil - who has been battling stomach cancer - by owner Prince Khalid Abdulla, a member of the Saudi royal family and owner of the Juddmonte Farms breeding operation.

In his victories since a debut in August 2010, Frankel has stood out with his remarkable turn of foot, including a breathtaking win in last year's 2000 Guineas.

He won 10 Group One races, with at least four lengths to the second-placed horse in his last six triumphs before Saturday's tighter affair.

Many consider him the greatest Flat racehorse of all-time although he is currently officially rated second best behind Dancing Brave in the modern-day rankings.

Winning margin: In 14 races, the aggregate distance between Frankel and the second-placed horses was 76.25 lengths (610 feet or 185 metres).

Anatomy of a champion

Shoe size: 7.5 in front, 7 behind (measured in inches). Frankel has big feet, compared to the average of about five for racehorses his age, and is the rough equivalent of a 12-year-old boy wearing size 11 shoes.

Diet: Eats around 23lbs of Canadian oats per day, plus other food including corn, bran, hay and the occasional carrot. Adds up to about 35,000 calories per day, compared to the recommended average of 2,500 for men.

Speed: Average top speed of 43mph is almost twice that of Usain Bolt.

Stride: His stride has been estimated at about 22ft, as opposed to 20 to 21ft for many other racehorses

What they say about him

"Everything I do from now on is going to be an anti-climax, isn't it? I won't find another one like him" - jockey Tom Queally.

"Frankel is just an unbelievable animal. Nobody seems to know why he is so fast. His stride just takes him away from the others"

"Frankel is absolutely breathtaking and a joy to behold. It's an amazing credit to the Cecil team for the way he has settled down. He appeals enormously as a personality" - former BBC commentator Sir Peter O'Sullevan.

"When he accelerates he destroys the opposition in about 100 yards. He is a magnificent racing machine" - 10-time champion trainer Sir Michael Stoute.

"I haven't seen his face; I only see his backside. But even if you do get beat, you have to admire him and clap him. I'm a sportsman and I really appreciate him being around. We have been blessed. I've been riding 25 years. We've seen some great horses and he's one of them. What he has done in our sport is fantastic" - three-time champion jockey Frankie Dettori.

"In football terms, Frankel reminds me of Cristiano Ronaldo - big, strong, tall, imposing and most of all, very fast. He's an incredible horse" - England and Manchester United midfielder Tom Cleverley.

What sets him apart?

"Frankel reminds you of a bull with big shoulders and a big back-side," says former champion jockey Willie Carson, a four-time Epsom Derby winner. "His stride is so effortless. When he canters, other horses are flat out. They are in awe of this guy. He just eyeballs them and glides away.

"The day he dies and the vets open him up will be the day we find out why he is so much superior to all the other thoroughbreds."

Some critics suggest Frankel cannot be considered a genuine great because he has only competed over distances between seven furlongs and 10 furlongs, and never outside England.

Sea The Stars, for example, retired after stepping up to the mile-and-a-half (12 furlongs) of the Epsom Derby and the Prix de l'Arc de Triomphe.

"He has beaten the best that's been put in front of him. It's not Frankel's fault that they have all run away. Frankel is a phenomenon."

Dettori added: "His style of racing detaches him from a normal horse. He destroys the field by a big distance and has never let anyone down.

"He's like Usain Bolt - a true athlete. When he gets on the track, he just blitzes everything else."