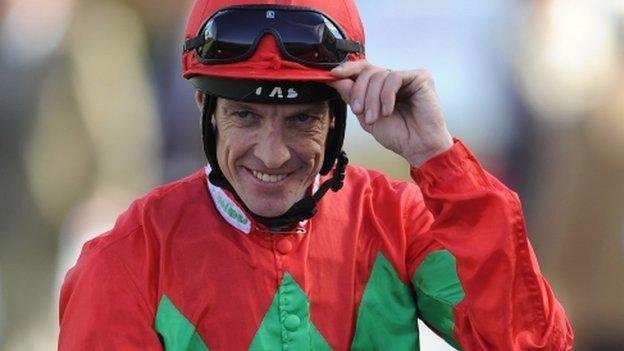 Hughes, 39, is the second rider to claim seven victories at a UK meeting and the first since Frankie Dettori went through the card at Ascot in 1996.

The Irishman won the first five races before finishing third on Ever Fortune. He then had victories on Duke of Clarence and Mama Quilla.

"I'm over the moon. It's great to do it," said the champion jockey-elect.

"I always said I might do it one day at Windsor, my lucky track."

His only defeat came as Ever Fortune finished seven-and-a-quarter lengths behind winner Valley Queen in the sixth race.

Bookmakers said the winning run cost them millions of pounds, with one punter alone reported to have netted £159,000.

Dettori is the only man to have ridden all seven winners on the same card when his mounts triumphed at combined odds of 25,095-1 in September 1996.

Hughes only had seven scheduled mounts at the afternoon meeting but, after his fifth win, was booked as a late replacement for Ryan Moore on Mama Quilla in the final race.

Hughes punched the air with delight after winning the concluding contest by two-and-a-quarter lengths.

Three of the seven victories came for his father-in-law, trainer Richard Hannon.

Hughes is well clear in the the riders' championship and is set to be crowned as champion Flat jockey for the first time next month.

He said his four-year-old son Harvey will have been cheering him on from home in Wiltshire.

"Every day my kid, Harvey, says, 'How many winners today? Six or seven?' said Hughes. "I tell him I won't ride that many, but I have today."

At 5ft 10in, Hughes is tall for a Flat jockey and has admitted problems in the past with alcohol and keeping his weight down to ride.

The respected Dublin-born rider is the son of prominent jumps trainer Dessie Hughes.

Winning the jockeys' title will cap a triumphant end to a season which began with Hughes serving out a 50-day riding ban incurred in India for not riding to instructions, an offence not punishable under British rules.

The seven-timer comes almost exactly a year after he gave up his licence in protest at new whip rules, before returning to the track after the regulations were changed.