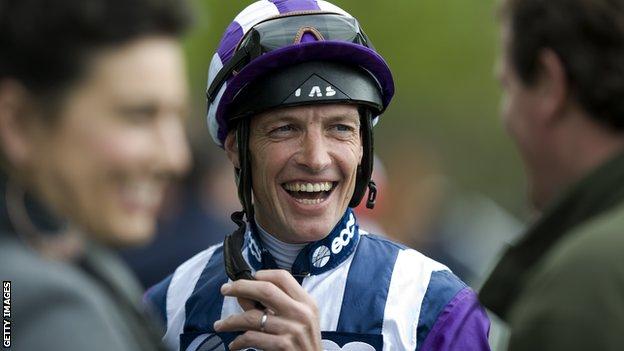 Jockey Richard Hughes followed up his record-equalling seven wins at one meeting by claiming another three successes at Leicester on Tuesday.

The 39-year-old Irishman carried on from where he left off at Windsor by landing the first two races of the day.

He came second last on My Queenie, but returned to guide Guiletta to victory.

It took Hughes's tally to 10 wins in 12 races over two days.

"It keeps getting better," Hughes said after winning the opening contest on Van Der Neer.

"I love this colt. I think that was a serious performance. He was always travelling well and, my God, did he quicken."

After victory on Tunnager Grove, Hughes added: "The bookies are running for cover!

"He did it well. I think I wanted to win it more than he did, though, that was the only problem."

Hughes's success at Leicester continued a remarkable week for the jockey.

On Monday, Hughes became only the second jockey in history to ride seven winners at a British meeting, following Frankie Dettori, who famously went through the card at Ascot in 1996.

Hughes claimed seven winners from eight races at Windsor at combined odds of 10,168-1.

His final win on Monday came on Mama Quilla, who was initially set to be ridden by Ryan Moore before he was stood down.

"No one likes giving up a winner," Hughes told BBC Sport. "It was all systems go once he came off."

Hughes won the first five races at Windsor, then finished third in the next before two more victories.

Hughes had initially been without a ride in the eighth race, and it was only after the fifth contest that he was booked as a substitute for Moore in the concluding event.

He said Moore felt tired after returning from a race meeting in Canada. The jockey was signed off by a doctor, but the grounds for his absence were not given because of "medical confidentiality".

Hughes said: "He said after the fifth race that he had flown back from Canada the night before and asked the trainer, William Haggas, if he could get off."

The seven-timer caps a triumphant end to the year for Hughes, who will be crowned champion Flat jockey for the first time next month.

Hughes went to a local pub near his Wiltshire home to celebrate his winning spree, but did not have any alcohol. He has been dry for more than seven years after admitting to a drink problem.

"When I was drinking, I wouldn't have appreciated it like I did yesterday," he said. "It was a big thrill. Now I don't need to drink to be happy."