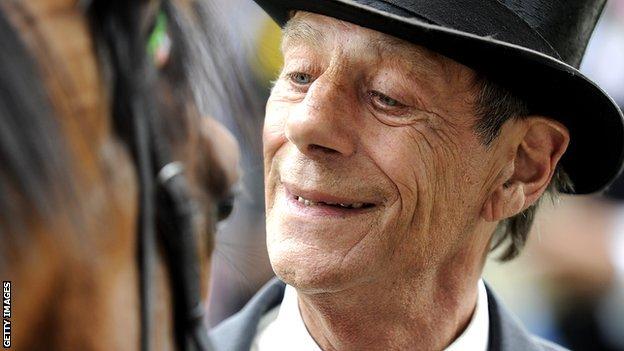 No one disputes that the famous skills and patience of Sir Henry Cecil have underpinned Frankel's relentless gallop to the very summit of global Flat racing.

From before the time the colt made his racecourse debut just over two years ago, Cecil has been at his side, a guiding light and a force for encouragement and reassurance when needed.

That wise counsel made certain that the gifted, yet occasionally volatile, youngster didn't go off any rails he shouldn't have, and that he arrives at Ascot for his expected finale on Saturday unbeaten in all 13 races.

Frankel seems in very good form, better than ever. We're on track. He seems great at the moment

True, there's been just the one Classic race in the sequence - a runaway success in the 2000 Guineas of 2011 - and other major prizes, including the Prix de l'Arc de Triomphe, have been bypassed.

But long experience indicated to master trainer Cecil that this was the correct path for the horse that he believes is not just the best he's trained - and there have been plenty of candidates for that accolade - but the best he's ever actually seen.

What is so heart-warming about this story is that it has not all been one-way, teacher-to-student traffic.

Just as Cecil has helped Frankel, so the now £100m world champion has been able to provide succour and support for his 69-year-old mentor during an ongoing struggle with serious illness.

It was in 2006 that Cecil was diagnosed with stomach cancer, and he continues to undergo regular, uncomfortable chemotherapy.

The 10-times champion trainer, alarmingly frail when attending the horse's most recent success at York but better since, confirms that his spirits have received much-needed lifts thanks to his protégé.

Although the treatment has affected his voice, he was able to declare to an enraptured Knavesmire racecourse crowd that August afternoon: "His win has made feel 20 years better. He [Frankel] has been a great help to me."

Racecourse crowds and betting shop punters alike have long admired Cecil, who was knighted by the Queen last year for his services to racing.

Although aristocratic of background, there's never been any hint of Downton Abbey.

He's the kind of colourful eccentric (his own word) that easily endears themselves to people, like the thousands of core racing fans to whom he's simply "Henry".

During the 1970s, '80s and '90s, the outstanding exponent of his craft collected a string of major prizes, each celebrated with the proud raising of the Cecil standard on the flagpole atop his Warren Place, Newmarket stables.

The winners flowed as the wardrobe got snappier; they were truly glory days that could surely never end, but they did.

A split with owner Sheikh Mohammed, a marriage breakdown played out in Fleet Street's gossip columns and the death of his identical twin brother, from cancer, all conspired for a dramatic fall from grace.

Suddenly, there were fewer and fewer horses and all kinds of talk of retirement, and that was before the cancer had made itself known. As a storyline, you couldn't make it up.

Cecil has said the support of his third wife, Jane, and owner Prince Khalid Abdulla, in whose green, pink and white silks jockey Tom Queally rides Frankel, ensured he could bounce back.

And back he is, to a position not far from where he was before to the noisy delight of a racing public that has roared its approval.

For over two years, they've loved to witness the prolific brilliance of Frankel, named after Prince Khalid's US trainer, Bobby Frankel, who lost a long battle with cancer in 2009.

That "Henry" has been such a big part of his story makes the whole thing that extra bit special.