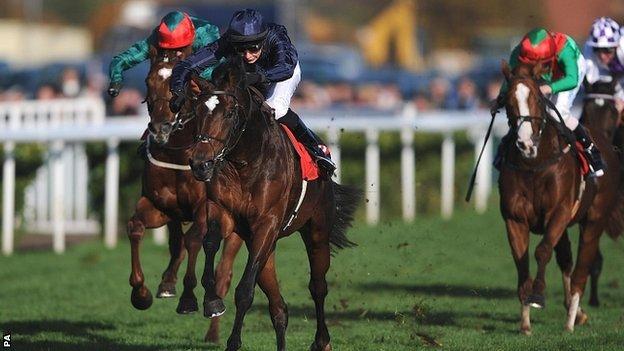 The 15-8 favourite, ridden by his son Joseph O'Brien, won by a length and three-quarters at Doncaster.

Winners of this race have gone on to win the following year's Epsom Derby four times since 2001 and Kingsbarns will be tipped to continue that record.

Joseph O'Brien was delighted with the performance of Kingsbarns in only his second race.

"He relaxed and travelled very well," said O'Brien. "I might have got to the front too soon, but my momentum took me there.

"He was very green, but I think he is going to be a very good horse. Soft ground or quick ground, he'll have no problem."

Kingsbarns, who was supplemented to the field at a cost of £17,500, won his maiden race at Naven by a seven-length margin earlier this month.

In the Racing Post Trophy, a race for leading juveniles, Trading Leather was first into the lead but Kingsbarns moved in front a furlong out and held off a late charge from Van Der Neer.

Meanwhile, 4-1 joint-favourite For Non Stop, ridden by Noel Fehily and trained by Nick Williams, cruised to victory in the Old Roan Chase at Aintree.