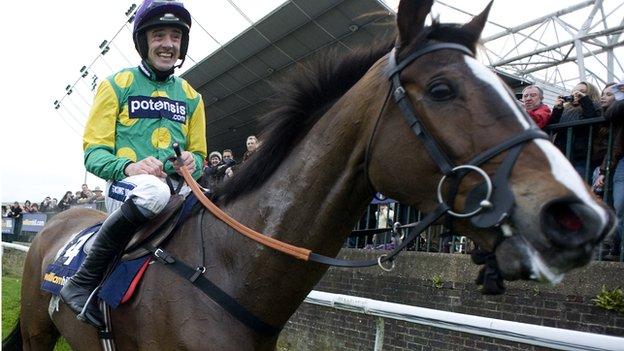 The 12-year-old, trained by Paul Nicholls, made history by winning the King George VI Chase for a fifth time on Boxing Day last year.

He is the only horse to have regained the Cheltenham Gold Cup having lost it but was pulled up when going for a third victory in March.

"We've decided to retire him as of today. I'd always thought he had done enough. It's been the journey of a lifetime. He's a wonderful, wonderful horse and a good friend of mine."

The decision to retire one of the greatest horses in jump racing history was made after Smith and Nicholls discussed his future on Wednesday morning.

"Clive and I had been talking about it during the summer," Somerset-based Nicholls told BBC Radio 5 live. "We both knew it was the right thing to do, it was an unanimous decision."

Kauto Star had initially looked set for retirement in 2011 after being pulled up at Punchestown.

But, after a summer's rest, he returned to win at Haydock in November before his famous King George triumph.

He was then rated only 50-50 for the Gold Cup after he fell in a schooling session three weeks beforehand, but Nicholls was satisfied that he had returned to full fitness for a race won by champion jockey Tony McCoy on Synchronised.

The trainer had considered giving the horse one last run, but said the time was right to retire him.

"We have had nine superb years with the horse but, after seeing him in his work these past few weeks, myself, Clifford [Baker, head lad] and Dan [Skelton, assistant trainer] were of the opinion that the time had arrived to retire him," Nicholls said.

"Racing's marketing folk are going to have their work cut out with the retirement of Kauto Star coming hot on the heels of Frankel's exit to stud.

The two have done wonders for racing's public profile, particularly 'Kauto' with his endearing ability to bounce back after things went wrong, as well as his big-race successes.

Now the sport is bereft of two charismatic performers within 11 days of each other.

"Of course, as owner, the final decision rested with Clive, but he agreed that the horse had done enough."

Nicholls told BBC Points West: "He's definitely one of the greatest, it's hard to compare generations but in my lifetime he's been the best and probably will be the best."

Regular jockey Ruby Walsh, who guided Kauto Star to 17 of his 23 career wins, said he had been "very lucky" to ride him.

"He's the horse of my lifetime. I'm very lucky to be the one who got to ride him," he told Racing UK.

Mick Fitzgerald, who rode Kauto Star to his first Grade One victory in the 2005 Tingle Creek Chase at Sandown, added: "It's great news he's been retired as he can now go and enjoy the rest of his life.

"You'd have to say Kauto Star is right up there with the best [there's ever been]."

The gelding is likely to stay at the Nicholls yard until the end of the year before being moved to stables near Smith's Surrey home for his retirement.

"Ninety per cent of the people who came up to me during the summer wanted the horse to be retired. It's by far the most popular decision we could have made," added Smith.