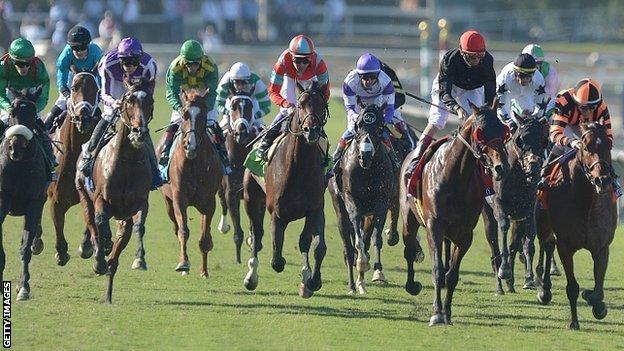 Defending champion St Nicholas Abbey was beaten into third by winner Little Mike and Point of Entry in the Breeders' Cup Turf at Santa Anita.

The Aidan O'Brien-trained five-year-old galloped on strongly, but could not match his heroics of 12 months ago.

O'Brien's jockey son Joseph said of St Nicholas Abbey: "I was a little wide turning in, but he ran a great race."

Ballydoyle's Excelebration could only finish fourth behind Wise Dan in the Breeders' Cup Mile.

Little Mike, a 17-1 shot in the mile-and-a-half race, sat off the pace set by Turbo Compressor, but under jockey Ramon Dominguez seized the lead in the closing straight to hold off 2-1 favourite Point of Entry and the fast-closing St Nicholas Abbey, who won at Churchill Downs last year.

Aidan O'Brien added of St Nicholas Abbey, who was 11th in the Prix de l'Arc de Triomphe in October: "We were delighted with him - it was a solid run.

"He got into a nice rhythm and I didn't think anything went wrong.

"He did have a tough race in the Arc on heavy ground and he didn't pick up the way he can do in the straight.

"I hope he will be around and keep going next year."

Little Mike's trainer Dale Romans said: "This is a perfect little horse - he runs so hard all the time."

"I said to Joseph, 'If he's rocking, let him rock,'" O'Brien said of Starspangledbanner. "His best performances have been over five- and six-furlongs. Maybe this six-and-a-half is just a bit too far.

"We can have some fun with him next year."