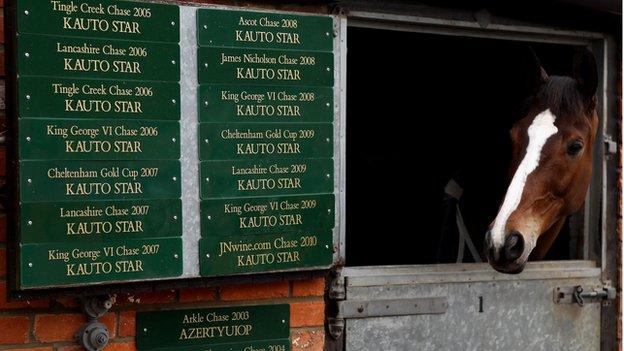 Kauto Star is the equine star who got the racing world talking with his steeplechase heroics.

He created history on Boxing Day 2011 at Kempton Park by becoming the first horse to win a fifth King George VI Chase.

The gelding is the only horse to have regained the Cheltenham Gold Cup having lost it, and won a total of 16 Grade One races.

Discover more about his story and the team behind a racing hero who has been retired at the age of 12.

Bred in France where he was nicknamed 'L'Extraterrestrial'.

In 41 races, he was victorious 23 times, only unplaced on seven occasions and was the first horse to win over £2m in prize money over jumps.

Kauto Star ran in the UK for more than seven years, during which time he never finished out of the first three when completing a race.

The French import delivered on his promise during the 2006-07 season, winning all six of his high-class races at six different tracks, over distances ranging from two miles to more than three-and-a-quarter miles.

In 2009 he became the first horse to regain the Cheltenham Gold Cup, having lost to stablemate Denman the previous year.

Just as many felt he was heading towards retirement, he won the Betfair Chase at Haydock for the fourth time in November 2011 and then followed it up by creating history in the King George VI Chase on Boxing Day.

What now for Kauto Star?

"Racing's marketing folk will have their work cut out with the retirement of Kauto Star coming hot on the heels of Frankel's exit to stud.

The two have done wonders for racing's public profile, particularly 'Kauto' with his endearing ability to bounce back after setbacks, as well as his big-race successes.

Now the sport is bereft of two charismatic performers within 11 days of each other.

Two of horse racing's all-time greats have been retired in the space of 11 days - but they are set for very different futures.

While the world's top-rated Flat horse Frankel goes off to stud for a breeding career where earnings could top £100m, Kauto Star - a gelding, and therefore castrated - will have a more leisurely time.

Owner Clive Smith says the brilliant steeplechaser is likely to stay with his trainer Paul Nicholls in Somerset until the end of the year before he is moved to new stables near his Surrey home.

"He's done all his work now and deserves a lordly retirement. It'll be nice to see him more often. His income will be nothing now, but that's not important to me," said Smith.

A rare mix of talent, versatility and courage, the horse will be remembered as a National Hunt icon alongside names such as triple Gold Cup winners Arkle and Best Mate, three-time Grand National victor Red Rum and Desert Orchid, who won the King George on four occasions. 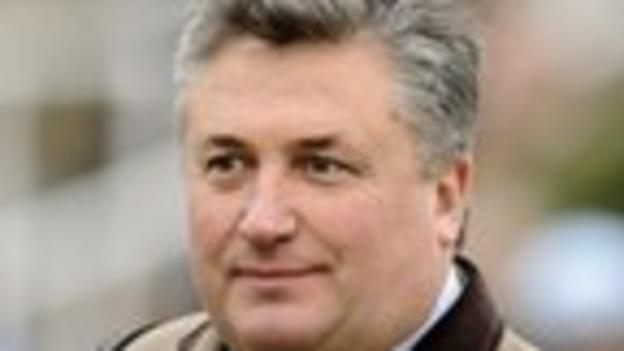 He says: "Kauto Star is a once-in-a-lifetime horse."

The son of a policeman, Nicholls was a jump jockey in the 1980s and won the Hennessy Cognac Gold Cup at Newbury twice.

He was assistant trainer to Devon-based David Barons, and was there when the stable sent out Seagram to win the 1991 Grand National at Aintree.

Nicholls took out a licence at Manor Farm Stables in Ditcheat, Somerset, later that year. He wrested the top trainer title in 2006 from West country rival Martin Pipe, who retired on the day Nicholls was crowned champion, and has been on top ever since.

He is good friends with another sporting winner - Manchester United boss Sir Alex Ferguson, who part-owns the Nicholls-trained horse What A Friend.

Nicholls won the Grand National for the first time, after 52 unsuccessful runners, with Neptune Collonges in April 2012. 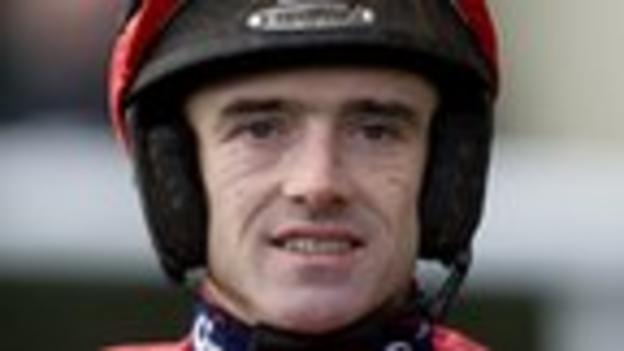 He says: "I loved every minute of riding Kauto Star."

Dreamed of winning the Gold Cup ever since, aged six, he saw his dad Ted on TV winning the amateurs' version - the Foxhunters' Chase - in 1986 on Attitude Adjuster.

Ruby, who was christened Rupert, won the Grand National with Papillon for his father Ted in 2000 and again on the Willie Mullins-trained Hedgehunter five years later.

Walsh was a former scrum-half for his local rugby club Naas in Kildare and is a passionate Manchester United fan. He says if Kauto Star was a footballer, he would be former United star Cristiano Ronaldo.

"Kauto would be the guy who can score from anywhere but likes to beat the extra player before he does," says Walsh, who won 17 times on the horse.

Age: 69 Background: Went to school in Windsor. Lives in Surrey. 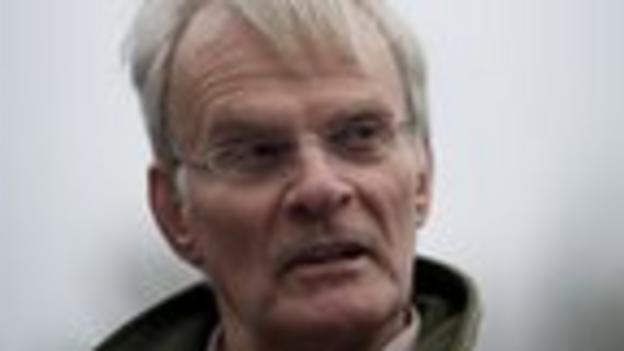 He says: "Having Kauto Star has been the journey of a lifetime."

Smith and his partner Janet Fleetwood slept with the Gold Cup on their bedside table after his first Cheltenham win.

He had dreamed of winning the trophy since attending his first Cheltenham Festival in 1974, and seeing Captain Christy triumph.

The silver-haired businessman, who made his personal fortune after spotting a gap in the market for decent public golf courses, bought Kauto Star in 2004 for about 400,000 euros. The purchase nearly never happened as the owner's main target was Garde Champetre until he was outbid by Irish multi-millionaire JP McManus.

A racehorse owner for more than 20 years, with trainers including Jenny Pitman and Martin Pipe, he has suffered the bad moments as well as the highs.

Smith's purple, green and yellow colours are taken from the heather-clad scenery of Camberley Heath golf course where he was once captain.

His breakthrough business golf course was Hawthorn Hill, which he later sold for a reported £8m. It was on the site of a former racecourse.

Stable girls Donna Blake and Rose Loxton have looked after and groomed the hoose.

Bloodstock agent Anthony Bromley found the horse in France and bought him for Smith.