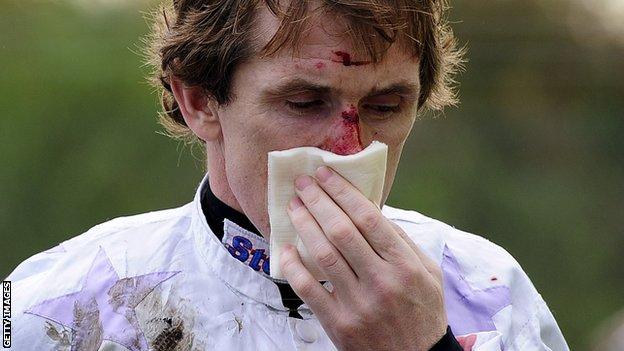 Tony McCoy returned to action with a winner on Saturday just a day after breaking several teeth in a fall at Wetherby.

The 17-time champion jockey steered My Tent Or Yours to victory at Ascot in his second ride of the day.

McCoy, 38, had been unseated from the Jonjo O'Neill-trained Mr Watson before the novices' hurdle 24 hours earlier.

He later said on Twitter: "My injury is very superficial. Just broke a few teeth and needed some stitches."

The injury saw McCoy stood down from the rest of his schedule for Friday, but he recovered to finish fifth on Swincombe Flame half an hour before riding favourite My Tent Or Yours to victory.

McCoy rode his 100th winner of the season at Hereford on Thursday.