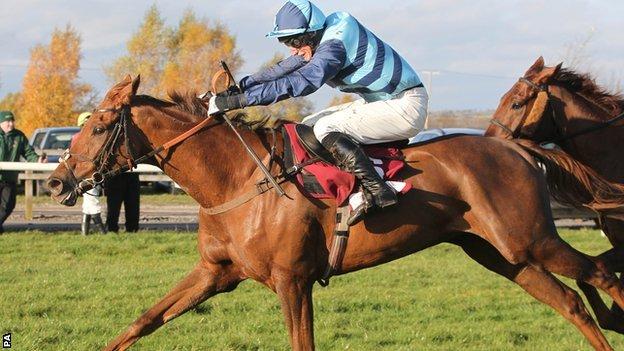 Kauto Stone was a 4-1 winner at the JNwine Champion Chase at Down Royal in the week his half-brother Kauto Star - who won the race in 2010 - was retired from the sport.

Ridden by Daryl Jacob and trained by Paul Nicholls, the six-year-old saw off First Lieutenant in a close finish.

Ex-champion chaser Sizing Europe was withdrawn on the morning of the race.

Trainer Henry de Bromhead had decided not to risk his stable star over three miles as the ground was deemed unsuitable, tweeting: "Sizing Europe a non-runner due to change in ground."

Sizing Europe, who won the 2011 Queen Mother Champion Chase, was runner-up to Quite De La Roque in last year's Down Royal race and second behind Kauto Star in 2010.

There was more joy for Nicholls elsewhere, as Silviniaco Conti won the Charlie Hall Chase at Wetherby.

The 11-10 favourite beat the outsider of the six-strong field, Wayward Prince, who finished second at 40-1.