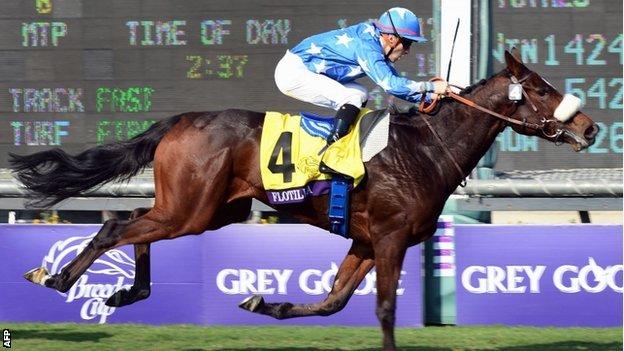 The Fugue was an unlucky third in the Breeders' Cup Filly and Mare Turf as European horses struggled on the opening day of action at Santa Anita.

The horse, part-owned by Lord Andrew Lloyd-Webber, was third in the Epsom Oaks in June and went off as favourite.

But jockey William Buick was never able to give his horse a clear run and she was trapped at the rail.

Zagora and Marketing Mix both proved too good for The Fugue but Buick admitted afterwards that he felt his mount would have won with a better passage.

"They went a bit slow and I stuck on the inside," he said. "I was behind the winner but I never got any room until a furlong and a half out. I think she's very unlucky, but we live to fight another day."

Flotilla became the first European winner of her race at the California track, beating Watsdachances into second, but the Richard Hannon-trained Sky Lantern was unable to get a clear run.

Jockey Richard Hughes said: "She jumped out really well, but when I came round the bend I was stuck with nowhere to go."

The trainer's son, Richard Hannon Jnr, said: "She came round the turn in a perfect position, but when she tried to get out Hughesie was forced back twice. She never came off the bridle."

Meanwhile, trainer Aidan O'Brien revealed that Fame And Glory, the winner of the 2011 Gold Cup at Royal Ascot, has been retired after finishing well down the field in the Breeders' Cup Marathon on the dirt.

He said: "The race was there in the book and we gave it a try. We took a chance and it didn't come off, so he will be retired now.

"He just showed us that he didn't like it and he wanted to go home."

The six-year-old's jockey Jamie Spencer said: "I was exactly where I wanted to be in the stretch first time, but then all of a sudden he just didn't want to know."