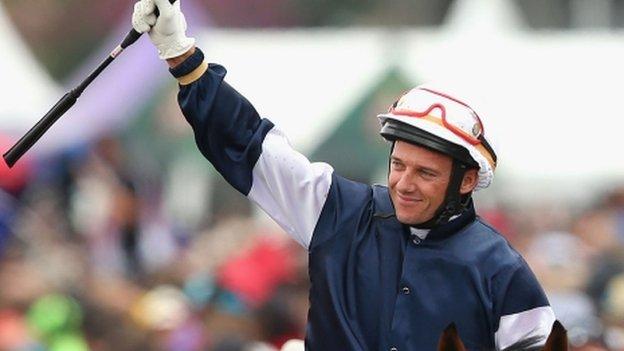 Green Moon, trained in Australia by Robert Hickmott and ridden by Brett Prebble, has won the 152nd running of the Melbourne Cup at Flemington.

The 19-1 shot, formerly trained in Britain by Harry Dunlop, triumphed from Fiorente and Jakkalberry.

No British challenger has won the race, which attracts a crowd of more than 100,000, with Marco Botti's Jakkalberry the best of five hopefuls this time.

Mount Athos, for Luca Cumani, was a fast-finishing fifth in the £4m race.

Known as the "race that stops a nation", the first two home in the 2012 Melbourne Cup were trained in Australia, although both were once based in Britain.

The winner ran eight times for Berkshire-based Dunlop in 2009 and 2010 before moving down under while Fiorente - making his debut for Gai Waterhouse - began his career with Sir Michael Stoute and only left the Newmarket trainer in the summer.

Green Moon flashed past the long-time leader Glencadam Gold a furlong and a half from home in the two-mile handicap under an assured ride to win by a length.

Fiorente (30-1) stayed on for second with 80-1 chance Jakkalberry a further length-and-a-quarter back. Australian bottom weight Kelinni was fourth.

"If he sustained the journey, nothing was going to go with him," said Australian jockey Prebble, who is based in Hong Kong.

"I've had some great highs here, but you don't get any higher than reaching the pinnacle.

"It's very emotional and it's going to last for a long time."

It was a fourth Melbourne Cup win for owner Lloyd Williams, a former business partner of the late media tycoon Kerry Packer. The owner's son Nick received the trophy from the Duchess of Cornwall, who attended the races with the Prince of Wales.

Several of the leading contenders came from overseas but last year's winner Dunaden (14th) and and 2010 champion Americain (11th), both trained in France, were among the fancied runners to finish well behind in the 24-horse field.

Americain was ridden by dual Cup winner Damien Oliver, whose build-up to the event was clouded by an allegation he bet on a rival horse in a race two years ago.

The Australian jockey, who has denied the claim, was due to ride Green Moon on his last run but was replaced when the betting reports surfaced.

European trainers said their chances were hampered by the slowly-run race.

Newmarket-based Botti, trainer of third-placed Jakkalberry, said: "He ran a very good race, but he probably could have done with the pace being a bit quicker."

The winner Green Moon is a son of the 1999 Prix de l'Arc de Triomphe victor Montjeu and the first seven horses were bred in Ireland.