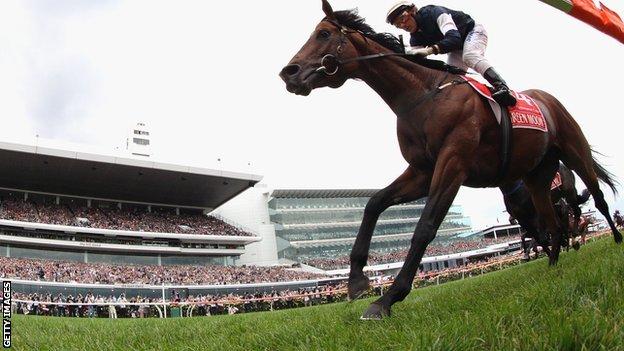 In 152 runnings, a British hopeful has never won the Australian contest known as "the race that stops a nation."

"There are mixed emotions, but it's great to be associated with a very good horse," Dunlop told BBC Sport.

Dunlop is the younger brother of Ed, who came within a nose of winning the two-mile Melbourne Cup in 2011 when Red Cadeaux was edged out by Dunaden.

Red Cadeaux was eighth this time as Green Moon beat Fiorente, who was with another British trainer - Sir Michael Stoute in Newmarket - until this summer.

"I've got a lot of messages and, of course, you wish it was your name by the winning podium," said Dunlop, the son of veteran trainer John.

"But he served me very well. We had a lot of fun with him. He was probably one of the best horses I've ever trained."

Green Moon, a five-year-old son of 1999 Prix de l'Arc de Triomphe winner Montjeu, was bred in Ireland by the wealthy Goldsmith family and was the only offspring of his mother Green Noon.

He was sold by owners Lady Annabel Goldsmith and Kate Rothschild in 2011 and moved to Australia.

"We had a few injuries and niggles with him. He was favourite for the King Edward VII Stakes at Royal Ascot [where he finished fifth]. He was a good horse," said Dunlop.

"His form did go slightly wayward and he had some physical problems, but he was a lovely horse.

"When he won his maiden race at Leicester, he won by eight lengths for Frankie Dettori and it was a very special day and when he won the London Gold Cup at Newbury he beat the future Dubai World Cup winner [Monterosso].

"He was always going to be sold. It would have been wonderful if someone had kept him racing with me but he's obviously really suited Australia and the warmth. He's been given the time to mature and strengthen which is what he always wanted."

Dunlop believes it is only a matter of time before a British-trained success in the race is finally being celebrated.

"I think it will come one day and it nearly happened last year - there was only a pixel in it. I don't see why it shouldn't happen," he said.