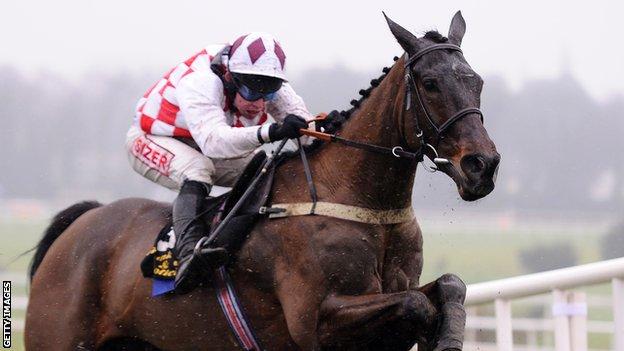 Pre-race 10-11 favourite Flemenstar powered to victory at the Fortria Chase at Navan to deny Big Zeb a fourth consecutive success in the event.

The Peter Casey-trained seven-year-old took the lead from the start and finished seven lengths clear.

The Andrew Lynch-ridden colt won five of his six starts over fences last season, and he showcased that form from the off as he left his 11-year-old opponent struggling at the back of the pack.

When Foildubh and Big Zeb attempted to close as the horses reached the finish line, he had plenty in the tank to burst clear in the Grade Two meet.

The win saw Flemenstar's odds for the Gold Cup in March cut with some bookmakers, although others feel he still has to prove himself over a distance of more than two-and-a-half miles.

Casey said the Gold Cup would be the aim, with the horse set to step back up to two-and-a-half miles for the John Durkan Memorial Punchestown Chase on 9 December 9 before trying three miles in the Lexus Chase at Leopardstown over Christmas.

"People are talking about the Champion Chase and the Ryanair [Chase at Cheltenham] and I suppose we could look that way if for some reason he doesn't get three miles at Christmas, but that is not the plan at the moment. I'm confident he'll get the trip."