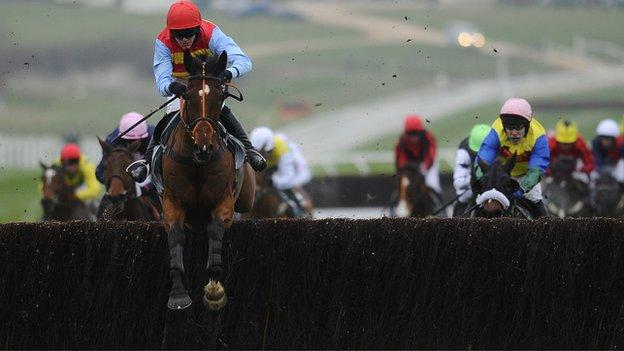 For many, Hunt Ball has all it takes to be one of the stars of the jump racing season.

Owned by a colourful West Country dairy farmer, the seven-year-old is the sport's most improved horse, a feat achieved while being part of a training operation so small that it has no gallops of its own.

The gelding's owner, Anthony Knott, at the head of an equally noisy and enthusiastic- as well as growing- band of friends and followers, has put his money where his mouth is, backing Hunt Ball to win £1m.

There's now even a line in merchandise for supporters, who themselves have a song to send them on their way:

And you've heard of the great Red Rum/

But forget about Hi Ho Silver/

Because this legend's just begun...

How Hunt Ball's gone up in the weights is amazing. He's like some horses, I suppose, that take a lot of time to mature

The plan is for the Paddy Power Gold Cup at Cheltenham (he's 2nd favourite) to be launch-pad for assaults on the season's two biggest pots, the King George V1 Chase and then the Cheltenham Gold Cup itself.

Completing the treble would net a 7-figure payout from bookmakers says Knott.

And all this from a horse, one of barely a dozen trained down a potholed lane in rural Somerset by ex-jockey Keiran Burke, 26, which only won for the first time, a lowly handicap chase at Folkestone, in 2011.

Since then, improvement has been so marked that were he to line-up in the same race again, Hunt Ball would be required to carry an extraordinary 88 pounds- over six stone- more to make it fair to the others.

Folkestone, however, is well behind now as the Hunt Ball team has climbed and climbed, taking in a string of prestigious prizes en route to one of the races at the showpiece Cheltenham Festival, no less.

Asked afterwards about getting home for milking, Knott famously proclaimed: "B***** the cows." It's become something of a catchphrase.

With its countryside roots and pride in the 'smaller' person being able to win major trophies, this is just the sort of romantic tale on which national hunt racing thrives, one to bring warmth to even the hardest of hearts.

Hunt Ball's jockey Nick Scholfield has such a sunny disposition that he's nicknamed 'Smiler', but mere mention of the horse, on which he won a first Festival race, quickly transforms the smile to the broadest of grins.

"To be part of the story has been remarkable," said the 23-year-old one-time novice point-to-point champion, one of jump racing's most upwardly mobile young riders. "It's helped put me on the map.

"When Keiran was still riding, we were friends and went racing together a lot, and he said he'd train me a winner one day, but neither of us imagined it would have been at Cheltenham.

"How Hunt Ball's gone up in the weights is amazing. He's like some horses, I suppose, that take a lot of time to mature which is obviously to the annoyance of those that had him before but great for us."

While Festival memories will live long in the mind, Scholfield will never be able to forget his initial introduction to Hunt Ball and, more particularly, to Knott.

"It was Wincanton, and we won. Anthony came running up, giving it the cheers, patting me on the leg and yee-hahing," he recalled. "Then he said to the girl leading us in to give him a leg-up.

"Suddenly he was there behind me on the horse. I was a bit in shock, so what do you do? I laughed, most people laughed, and the horse didn't seem to mind."

Although the stewards imposed a £100 fine for 'improper conduct', it's believed they smiled inwardly, if not outwardly while doing it.

It's that kind of story. Next top Cheltenham, Nov 17th. Knott believes Hunt Ball will 'do a Frankel' and destroy his opponents in the style of Flat racing's unbeaten champion.

Jumping can't wait to see what happens, and to witness celebrations.

As the song concludes: