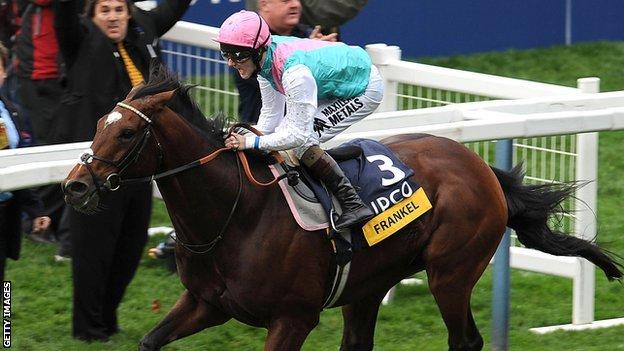 Frankel has been named racehorse of the year at the Cartier Racing Awards for a historic second successive time.

Horse of the year - past winners

"Frankel, with his brilliance, has captured the hearts of so many people, some of whom have never been racing in their lives," said Cecil.

"Thank you Frankel and to everyone that has voted for him."

Cecil, who is battling stomach cancer and was too ill to attend the ceremony, added: "All of us at Warren Place are thrilled that Frankel's achievements this year have been recognised with him winning this most prestigious award for the second time running."

The four-year-old colt capped his career with victory in the Champion Stakes at Ascot last month.

This was only Frankel's second race over 10 furlongs, having stepped up from a mile for the first time at York in August.

His previous 12 victories before that had come over seven furlongs and a mile and included the 2000 Guineas classic at Newmarket in 2011.

Only once has another horse won the prestigious award twice, with Ouija Board winning in 2004 and 2006. She won a total of four Cartier awards in her career.

Lord Grimthorpe, racing manager to Frankel's owner Prince Khalid, said: "The horse was named in honour of one extraordinary conditioner and trained by another.

"I have been in racing long enough to know this is a once in a lifetime experience. Frankel has set the standard by which all future champions will be judged."

Rory Mahon, who managed a stud where Frankel was based while in Ireland, added: "In all the years of handling horses, Frankel was the easiest horse to handle.

"When he left, we probably hoped he could win an English Guineas but to finish up champion is unreal."

The awards are determined by points earned by horses in Pattern (top-class) races throughout 2011, combined with the opinions of a panel of racing journalists and votes from readers of the Racing Post and the Daily Telegraph.

The award of merit went to Team Frankel which recognises the work of Cecil and his team in supervising Frankel's development at Juddmonte Farms in Britain.

The Fugue, who has never finished outside the top four, was named champion three-year-old filly while Camelot took the honours in the three-year-old colt category.

Australian racemare Black Caviar, trained by Peter Moody and unbeaten in 22 races, won the sprinter award while Colour Vision, owned by Godolphin but trained by Saeed bin Suroor, takes the honours in the Champion stayer category after his Gold Cup victory at Royal Ascot.