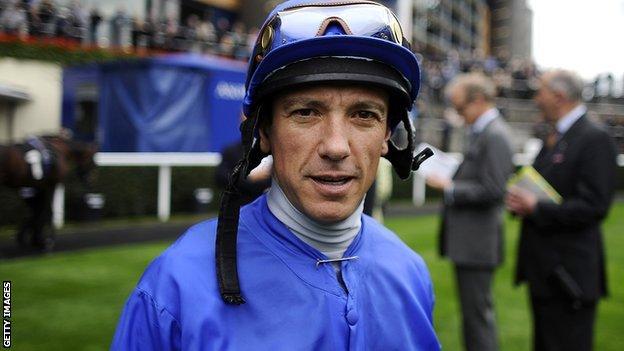 Frankie Dettori is horse racing's showman - the celebrity jockey who transcends the confines of his sport.

From his flying dismounts to easy-going banter, the Italian-born rider is perhaps racing's most well-known figure.

His six-month worldwide racing ban for failing a drugs test in France is the latest twist in a life that has seen many highs and several lows.

The 41-year-old has been champion jockey three times, rode a famous record-breaking 'Magnificent Seven' winners in one afternoon at Ascot in 1996 and has clocked up 110 victories at the highest Group or Grade One level.

At the height of his fame, he presented Top of the Pops and became a team captain on the BBC's Question of Sport programme.

But there have been dark days too. His early career was blighted by a police caution for possession of cocaine and he later admitted to using a variety of drugs to keep his weight down.

In 2000, he was lucky to escape with his life when he and fellow jockey Ray Cochrane were involved in a plane crash at Newmarket that killed pilot Patrick Mackey. Cochrane, now Dettori's racing agent, needed to pull his friend from the burning wreckage.

The jockey, who is 5ft 4in tall and weighs about 8st 5lb, came to Britain in 1987 to ride for compatriot Luca Cumani, and was champion apprentice two years later.

He became the first teenager since the legendary Lester Piggott to ride a century of winners in a British season.

But the young Italian's early career suffered as he enjoyed a party lifestyle and his partnership with Cumani ended.

Just as a winter move to Hong Kong appeared on the horizon in 1993, he was found by police with a wrap of cocaine in his pocket near London's Oxford Street.

Dettori had spent the day drinking as he went to support Arsenal at Wembley in their League Cup final win over Sheffield Wednesday.

"Drugs have never been my scene and never will be, but - like a lot of young guys - I experimented without thinking of the consequences," he said in his autobiography.

He was given a caution and later said the incident was a turning point in his life. Then a self-confessed ladies' man, he vowed to get his career back on track.

"The last thing on my mind each day was racing. All I thought about was partying and chasing the girls. That's why I ended up lost, on my own. I must have been crazy to let myself slip so far," he said.

Dettori went on to meet his future wife Catherine and landed a plum job with Sheikh Mohammed's Godolphin racing team.

It was a racing association that would last 18 years and bring success around the world.

He was champion jockey twice and then cemented his place in sporting folklore by riding all seven winners on a high-quality card at Ascot in September 1996.

The BBC interrupted its Final Score football results programme to show his seventh win, with the accumulator sealed at combined odds of more than 25,000-1 and making headlines around the world.

Dettori was box office. The immaculately dressed rider went on to have his own range of Italian-style foods and a chain of restaurants in London.

In the saddle, he remained a master of his profession, particularly in big races such as the Dubai World Cup - which he has won three times, including with his favourite horse Dubai Millennium.

A supreme tactician and shrewd judge of pace, he was champion jockey again in 2004.

Three years later, he finally achieved his dream of winning the Epsom Derby - at the 15th attempt - when Authorized triumphed.

"Look at his record - you don't become a brilliant jockey with only one or two qualities. He has everything," said recently crowned champion jockey Richard Hughes of his close friend.

But Dettori's partnership with Godolphin became strained this year, as young riders Mickael Barzalona and Silvestre de Sousa were recruited and the top rides for the stable were no longer guaranteed.

His positive test came on Arc trials day, 24 hours after Barzalona had won the St Leger, the season's final British Classic, on Encke for Godolphin.

Father-of-five Dettori, who has been an ambassador for racing's British Champions Series, will become freelance next year. Before news of the drugs test emerged, Cochrane had indicated the Italian might try for a fourth champion jockeys' title. Dettori appeared determined to prove he was not a spent force.

While his career is clearly at a crossroads, it would be foolish to bet against him bouncing back from his ban.

Dettori told BBC Sport in October 2012 that he hoped to keep riding at the top level for several more years.