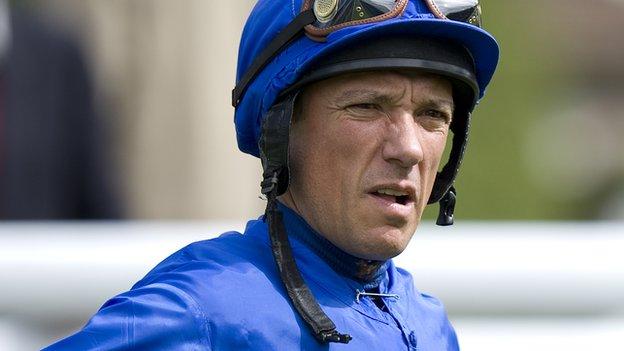 Frankie Dettori's solicitor says the jockey's positive test in France for a banned substance does not relate to a performance-enhancing drug.

Dettori faces a French horse racing inquiry after the test at Longchamp racecourse in September.

His solicitor, Christopher Stewart-Moore, has said the inquiry, by France Galop, will begin next week.

"There are a large variety of substances which are banned by France Galop," Stewart-Moore told BBC Sport.

"We are not going to say which substance he has tested positive for as that would be in breach of their rules, but it's not a performance-enhancing drug."

Dettori gave a positive test on 16 September, a day of trials for the Prix de l'Arc de Triomphe meeting in October.

The rise, fall and rise of Dettori

"Frankie Dettori is horse racing's showman. At the height of his fame, he presented Top of the Pops and became a team captain on the BBC's Question of Sport programme. But there have been dark days too"

He was then beaten by a head into second on Godolphin's Farhh in the Prix du Moulin and was third for his former employers on Willing Foe in the Prix Gladiateur.

France Galop has not commented on proceedings and, in keeping with similar previous cases, has not issued a statement before the hearing.

If found in breach of its rules, Dettori could face a ban of up to several months. Any suspension would apply worldwide.

Last month, three-time champion jockey Dettori announced he is to split with Sheikh Mohammed's Godolphin operation after an 18-year association.