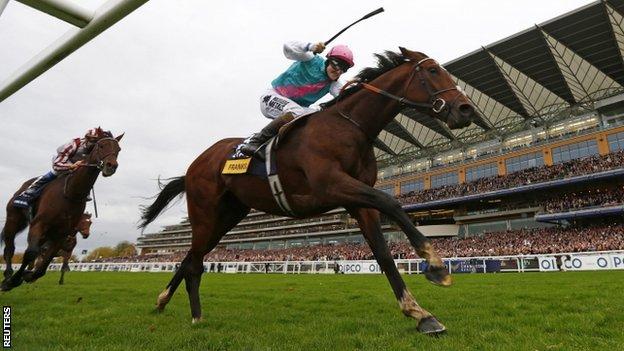 Frankel is due to begin breeding duties at the Banstead Manor Stud next year.

Philip Mitchell, a spokesman for the stud farm, near Newmarket, said: "The fee for Frankel reflects his merits as being perhaps the greatest racehorse we have ever witnessed."

The fee of £125,000 is the charge for each owner whose mare breeds with the stallion, and is on a no-foal, no-fee basis.

With an expected annual roster of 100 mares, Frankel could generate more than £12m in his first year and well over £100m overall during his stud career, compared with nearly £3m in prize money he won as a racehorse.

The colt, son of 2001 Epsom Derby winner Galileo and grandson of champion stallion Sadler's Wells, was retired from racing after winning the Champion Stakes at Ascot in October.

He also made history on Tuesday by winning the racehorse of the year prize at the Cartier Racing Awards for the second successive time - something that had never been done before.