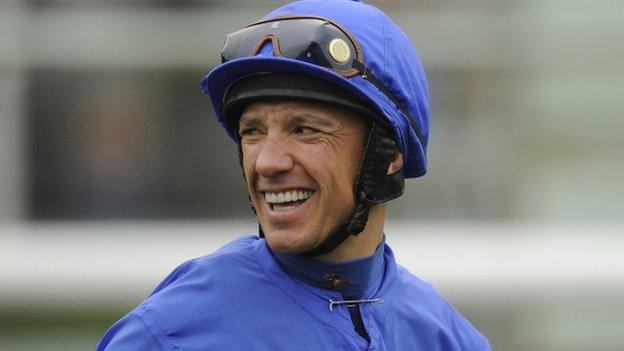 Jockey Frankie Dettori passed a total of six random tests for banned substances in Britain during 2012.

He faces an inquiry in France after providing a positive test at Longchamp racecourse in September.

His solicitor says the banned substance is not a performance-enhancing drug.

He added: "The testing procedures in place in British racing are very robust.

"Our data suggests there is no endemic problem with the use of prohibited substances in British racing."

The rise, fall and rise of Dettori

"Frankie Dettori is horse racing's showman. At the height of his fame, he presented Top of the Pops and became a team captain on the BBC's Question of Sport programme. But there have been dark days too"

Of these, one of the 474 licensed riders - Jack Mitchell - tested positive for cocaine and was given a six-month ban while there were two failed alcohol tests.

Dettori is believed to have been tested more than the average - of about two annually per rider - because, along with other top jockeys, he has a greater number of rides during the year and more at the major meetings.

Every jockey undergoes a breath test at the big British race fixtures, including the Epsom Derby and Royal Ascot, where several riders must provide urine samples.

Officials carried out 298 urine and 575 breath tests at British courses during 2011.

Dettori gave a positive test on 16 September, a day of trials for the Prix de l'Arc de Triomphe meeting in October.

France Galop has not commented on proceedings and, in keeping with similar previous cases, has not issued a statement before the hearing.

Dettori's lawyer has refused to specify which substance is involved.

If found in breach of its rules, the rider could face a ban of up to several months. Any suspension would apply worldwide.

Last month, the three-time champion jockey announced he is to split with Sheikh Mohammed's Godolphin operation after an 18-year association.

He is also a three-time winner of the Prix de l'Arc de Triomphe, on Lammtarra in 1995, Sakhee in 2001 and Marienbard the following year.