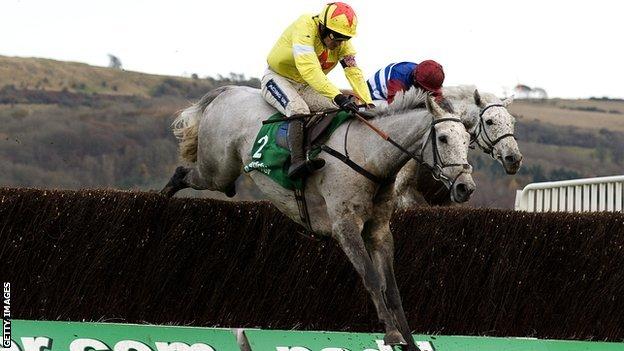 The grey, ridden by Ruby Walsh, overcame a significant weight burden to hold off Walkon up the gruelling hill and win by three lengths.

Grands Crus, who won the Feltham Novices' Chase at Kempton, and Hunt Ball, the sport's failed to figure in the closing stages.

Al Ferof is now set to go in the King George VI Chase on Boxing Day after impressing at Cheltenham.

"He came in late because he cut himself in the field, but he had a gallop at Wincanton last weekend and went really well," said Nicholls.

"We'll have to think about Kempton (King George) I suppose - he stayed well there and I think we'll have to look at it. The second-season chasers of ours like him are improving; I don't think the horses were right last year.

"The main thing is to have horses for all the big races. Everyone thinks we want to win the trainers' championship but it's honestly not true. Days like this and bringing young horses through are what makes it all worth it."

Al Ferof's owner John Hales added: "I think we have decided we will go to the King George now, and he is a horse that we are going to have look after."

Trainer David Pipe could offer no explanation for the run of favourite Grands Crus, while Keiran Burke, trainer of Hunt Ball, said the horse was unsuited by the ground.