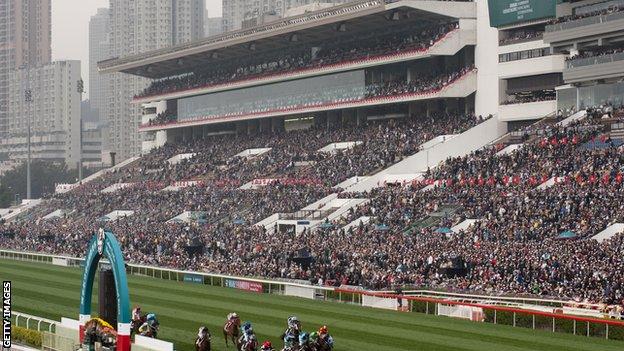 Scottish racehorse trainer Jim Goldie is used to arduous trips in his horsebox when his runners feature in big races at Ascot and Goodwood.

He's even taken horses over the water to compete in Ireland and France.

But he's now making final preparations to have a runner in the east: and we're not talking about Musselburgh!

When I say east, I mean Far East - Hong Kong to be exact.

His stable star, the imaginatively-named Hawkeyethenoo has been invited to run in the Group 1 Longines Hong Kong Sprint at the Sha Tin Racecourse on December 9 - a race that's worth £1.2m.

Hawkeyethenoo has already had a season to remember by winning the Stewards' Cup at Glorious Goodwood before finishing runner-up in the big sprint on Champions' Day at Ascot last month - that was the same day that the great Frankel won his final race.

With eight wins from his 37 races, Hawkeyethenoo has proved himself a top sprinting money-spinner for the yard with career earnings of just over £300,000.

"We're just waiting for final confirmation but the travel arrangements are in place," Goldie told me. "He'll fly from Stansted Airport along with all the other British runners taking part at the meeting."

And he knows Hawkeyethenoo faces a difficult task.

"It's very exciting as he's the first Scottish-trained horse to be invited," he added. "But it's also a huge challenge as British runners don't have a great record of success out there.

"I'll be talking to other trainers like Ed Dunlop who've had runners there before as I'm sure there are a few tricks to be learned about travelling so far with a horse."

If all goes to plan, Hawkeyethenoo will fly out at the end of November and go into quarantine for six days. He'll be ridden by Graham Lee who's been on board for all his races this past season.

Spending a few days in Hong Kong just before Christmas would seem, for many of us, a nice end-of-year break. But Jim Goldie has issued this warning to the other runners.

"We are not going out there for a holiday, we want to plunder some of that big prize-money."