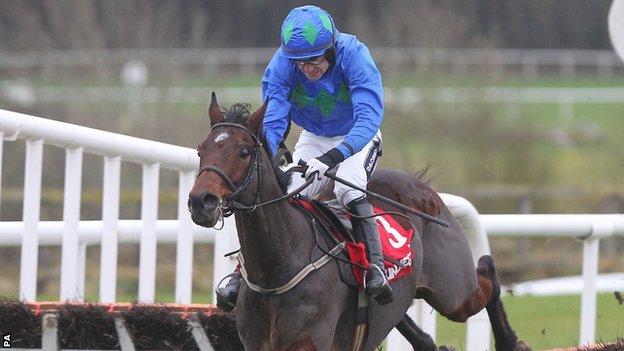 Hurricane Fly cruised to victory in the Morgiana Hurdle at Punchestown.

Meanwhile, Cheltenham's Shloer Chase was hit by the withdrawal of Sprinter Sacre because of the soft ground.

But Wishfull Thinking, who suffered an horrific fall at the course in March, produced an impressive display to win.

"We weren't worried about the trip or ground," said Hurricane Fly's trainer Willie Mullins. "He's certainly a different horse to last year. I was not happy with him last season.

"As he gets older he seems to settle better and hopefully he'll improve from that.

"We'll look at Leopardstown at Christmas now and the plan will be that, the Irish Champion and Cheltenham, as the races are well spread out."

Wishfull Thinking, whoscattered spectators when he fell in front of the stands in March's Queen Mother Champion Chase, put in an impressive performance to win the Shloer Chase.

Aside from a poor jump at the first, the 8-11 favourite never looked in much danger from his main rival in the betting, Doeslessthanme.

"The main problem for a long time has been his breathing - he's had three breathing operations," said trainer Philip Hobbs.

"But this season he has been better. We had a scare at the first fence, but he did it well.

"The Peterborough Chase (at Huntingdon on 13 December) is now the obvious race. I think two-and-a-half miles is his best trip."