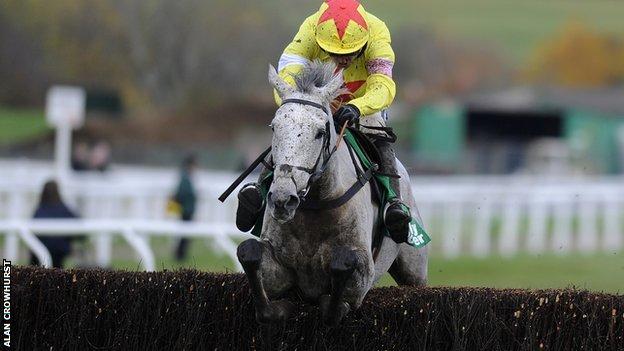 Grand National-winning owner John Hales has not ruled out a tilt at next year's Cheltenham Gold Cup with his new star, the Paul Nicholls-trained Al Ferof.

In the wake of Al Ferof's classy Paddy Power Gold Cup win on Saturday, Hales said their next mission was the Boxing Day King George VI Chase at Kempton.

But Hales told BBC Radio Shropshire: "It was such a brilliant performance, you have to think of the Gold Cup.

"Paul says if he hosed up in the King George, it would tell us he's ready."

Coming on top of Hales' Aintree victory with Neptune Collonges in April - and his success with One Man in the 1990s - the Shropshire owner was euphoric in his praise for last Saturday's Cheltenham display.

"That's as good a performance as any horse we've ever owned," added Hales. "It was a stunning win.

"I thought the ground would go against us and he was carrying almost top weight, but it was an awesome performance.

That's as good a performance as any horse we've ever owned

"And going to Kempton on Boxing Day on that performance he'd have a very good chance.

"Two miles, four-and-a-half furlongs on that ground round Cheltenham would be more than he's likely to face in terms of the three miles on Boxing Day at Kempton.

"But, if he doesn't stay strongly, then we'd say let's leave it a year for the Gold Cup.

"The long-term aim would have to be the Gold Cup. And Paul is of the opinion that it shouldn't be next year, but should be the year after.

"Only time will tell and I've learned not to get carried away with one result. But we have to keep our options open.

"I don't think the Gold Cup of 2012 was a particularly strong field and, if Al Ferof is still making progress, you'd expect him to run well in that company.

"You never know from one year to the next who you're going to be up against."