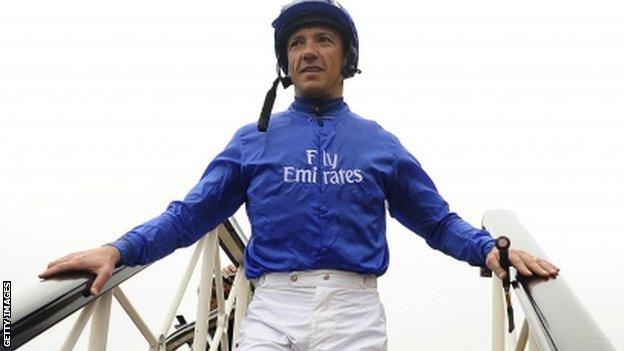 The positive test for an unspecified illegal substance was considered by a Medical Commission on Tuesday.

A hearing is expected within two weeks with Dettori, 41, facing the possibility of a worldwide ban.

Dettori's solicitor said the British-based Italian rider had no intention of riding until a decision had been made.

In a statement, Dettori's solicitor, Christopher Stewart-Moore, said his client accepted the conclusions of the Medical Commission "without reservation".

"He can now confirm that until the matter is resolved by the stewards of France Galop at a hearing within the next fortnight he will not be riding again anywhere," said Stewart-Moore.

"Once the stewards of France Galop make their decision he will make a full statement but is unable to do so until such time as that final decision is announced."

The suspension makes little difference to Dettori as he would not expect to ride in France at this time of year.

Dettori was not present as France Galop's medical committee considered his case on Tuesday but he answered questions via a conference call.

Dettori tested positive at Longchamp racecourse on 16 September for a substance which his lawyer has said is not "performance enhancing."

The options open to France Galop, which is unlikely to name the substance involved, range from dropping the case to imposing a six-month ban. Any suspension would apply worldwide.

Dettori gave a positive test at a Sunday meeting which was a day of major trials for October's Prix de l'Arc de Triomphe meeting.

The rider had four rides at Longchamp on that day.

He was then beaten by a head into second on the Godolphin-trained Farhh in the Prix du Moulin and was third for his former employers on Willing Foe in the Prix Gladiateur.

France Galop, the rulers of French racing, said two urine and three breath tests were carried out on 16 September and that jockeys should expect to be tested at least once a year.

Spokesman Julien Pescatore, said: "Frankie Dettori was not targeted. On average we test around five jockeys a day, and on big days we test 15."

Last month, three-time champion jockey Dettori announced he was to split with Sheikh Mohammed's Godolphin operation after an 18-year association and go freelance from 2013.