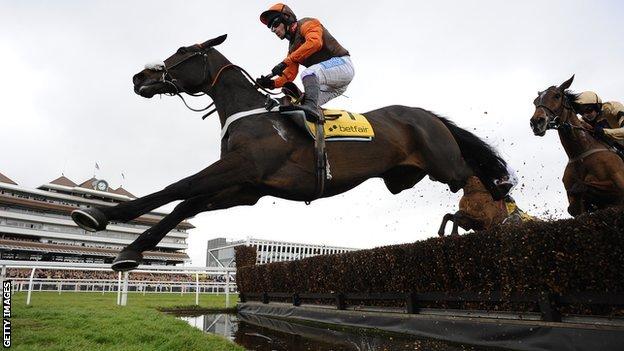 For the second year running, the six or so minutes of Haydock's Betfair Chase look critical for the leading contenders.

In 2011, Kauto Star's career was on the line, with friends and foes alike wondering increasingly loudly if the 10-year old, who'd been pulled up in his previous race, at Punchestown, should call it a day.

However, those sceptics were dramatically silenced by an explosive performance.

Positively brutal in its efficiency, the tables were well and truly turned on Long Run, five years his junior and his conqueror in the previous season's King George V1 Chase and Cheltenham Gold Cup.

"Retirement? Not on your life," roared BBC Radio 5 live's commentator John Hunt as Kauto Star, himself the winner of two Gold Cups, galloped to a truly famous victory.

A few weeks later, back in the King George, he repeated the whole process, with Long Run again at the receiving end of a bashing.

Kauto Star returns to Haydock for this year's race, but, now retired, he will simply be there to parade for his fans before allowing the runners a clear run at the prestigious Grade 1 prize.

No one will be happier at his absence than the team around Long Run.

Although they were the ones who originally dethroned the record-breaking champion, he returned the compliment with interest last season.

The younger horse, ridden by amateur rider Sam Waley-Cohen, looked to have his heart 'broken'; now he must demonstrate the pieces have all been stitched back together again.

But even with the absence of 2010 Gold Cup winner Imperial Commander, who misses the race with an injury, there is another prominent Cheltenham Festival achiever.

The Giant Bolster, named after a mythical Cornish ogre, put in a gigantic performance at 50-1 to finish second behind the ill-fated Synchronised in this year's Gold Cup.

But being part of the small Cotswold team of top jockey-turned-trainer David Bridgwater, plenty have been happy to dismiss his run as something of a fluke.

A prominent finish at Haydock would go a long way to forcing those particular critics back into the undergrowth.

So big days for Long Run and The Giant Bolster.

The bad news, however, is that also present is Wetherby winner Silviniaco Conti, representing Kauto Star's trainer Paul Nicholls, and seen as having the potential to be the stable's next champion.