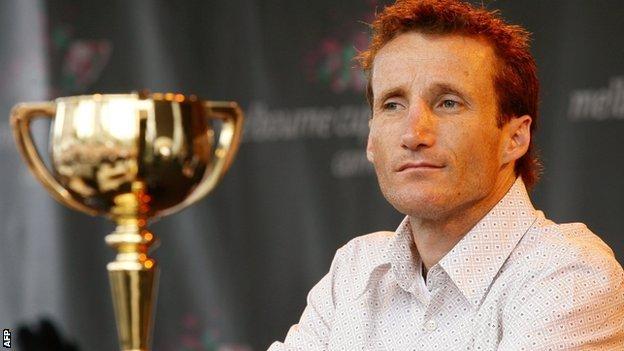 Melbourne Cup-winning jockey Damien Oliver has been banned for 10 months after placing a £6,500 bet (10,000 Australian dollars) on a rival horse.

The Australian has won the country's big race twice - including with the Irish-trained Media Puzzle in 2002 just days after the rider's brother died.

Oliver, 40, placed the winning bet, via a third party, in another race in which his own mount finished sixth.

I look forward to continuing my career in racing in the future. I know I have to work hard to restore people's trust in me

"I apologised for a spur of the moment decision that I will regret for the rest of my of career and beyond," he told reporters after a disciplinary hearing.

"There were a lot of difficult personal issues going on in my life at the time, however there are no excuses for the fact that I breached the trust of many people in the industry and I broke a fundamental rule of racing."

Oliver said he was in emotional turmoil and had developed a drinking problem after his wife had left with their three children.

"It was probably the worst period in my life. I was now living alone and unsure if I would be able to save my marriage," he said.

He admitted placing the bet on Miss Octopussy, the winner of a race at Moonee Valley in October 2010, leading to the eight-month disqualification.

The rider, who was sixth on second favourite Europa Point, was also charged with having in his possession, and using, a mobile phone in the jockeys' room before the race, for which the stewards handed him a two-month suspension.

Racing Victoria chairman Michael Duffy said: "The result of today's stewards' inquiry has sent a powerful message to the jockey profession that there is a zero tolerance of any breaches of the prohibition on betting."

Oliver's 2002 Melbourne Cup win on Media Puzzle, trained by Dermot Weld, came days after his older brother Jason was killed after falling from a horse at Perth's Belmont racecourse. Damien attended his funeral 24 hours after winning the famous race.

Their father Ray died after a fall during a race in 1975, when Damien was aged three.