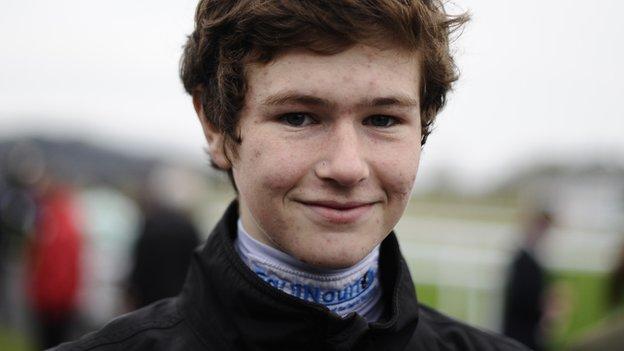 Jockey Brendan Powell has been banned for 14 days after taking the wrong course when poised to win at Fakenham.

The 17-year-old, whose father Brendan won the 1988 Grand National on Rhyme 'N' Reason, jumped the last fence clear on Benny The Swinger.

But rather than stay left alongside the winning post, the horse went to the right and jumped another obstacle.

As the drama unfolded, 17-2 shot Peak Seasons won the race by a nose from Roc De Guye.

Powell was aboard the 5-4 favourite in the handicap chase at the Norfolk track when he looked set to clinch victory, before mistakenly jumping the last fence from the previous circuit.

Trainer Chris Gordon, who was at Folkestone, told the At The Races TV channel: "It's one of those things that happens up there [at Fakenham] far too often. If only they dolled it off on the final circuit, so jockeys can't make a mistake.

"It's such a tight circuit. I'm not going to shout at the boy. I'll let his father [Brendan Powell senior] give him a bit of a rollicking.

"It's very upsetting but it's one of those things at Fakenham that has happened so many times. I think the track ought to try and do something so they can't go on the chase course."

Powell will be out of action from 4-17 December inclusive.