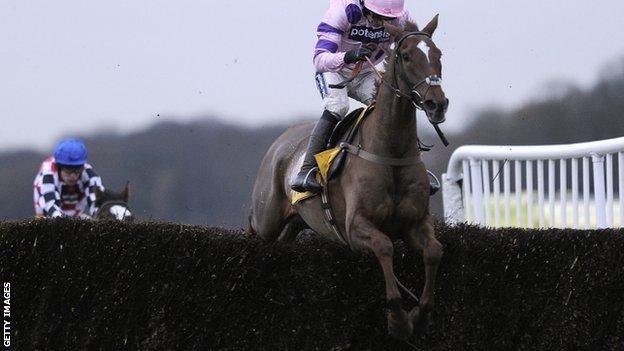 Silviniaco Conti led from the start as he won the Betfair Chase at Haydock.

The Paul Nicholls-trained horse made just one mistake, over the last fence, but jockey Ruby Walsh kept his mount on track to hold off favourite Long Run.

"He's a decent horse, he's only six and he jumps and stays," said Nicholls. "I may take him straight to the Gold Cup."

Walsh added: "It's a natural step and looks an obvious target. I'd love a chance to ride another winner at Cheltenham in the Gold Cup."

Silviniaco Conti travelled well over the three-mile trip and cleared the majority of the 18 fences without bother.

Speaking on Channel 4, Nicholls continued: "He jumped brilliantly. He wants to be fresh and I'm not going to run him through the winter in the mud. He could be really interesting, come Cheltenham.

"Kauto [Star] won this as a six-year-old and went on to win the Gold Cup in the same season, and this horse is very, very exciting. He jumps, he has speed and he stays very well.

"He definitely won't run in the King George, I don't think Kempton is his track. We could give him a run in something like the Aon but I certainly wouldn't be worried about going straight to Cheltenham with him."

The horse's only error, when he got in too close to the last, allowed Long Run, who finished second to Kauto Star in this race last year, to close the gap but Silviniaco Conti kicked on to win by two and a half lengths with The Giant Bolster third.

Long Run, who won the King George VI Chase and Gold Cup in 2011, maintained his record of finishing in the first three in 23 career starts.