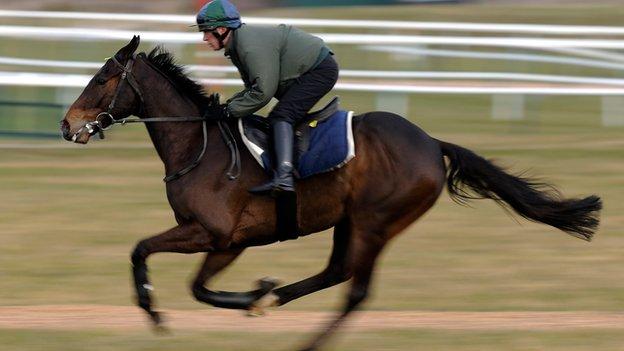 Leading hurdler Go Native has died after breaking a leg on the gallops.

The nine-year-old, trained in Ireland by Noel Meade, won three Grade One races, including the Supreme Novices' Hurdle at Cheltenham in 2009.

Meade said: "We're in a state of shock at the moment. We are all completely devastated. It's a cruel blow for his owners and everyone in the yard."

Go Native fell at the final flight when a length behind eventual winner Hurricane Fly at Punchestown on Sunday.

"We had the physio check him out thoroughly earlier in the week and she was happy that he was perfect. We'll never know now," said Meade.

Owned by the Docado syndicate, Go Native returned from an absence of 939 days to be third on the Flat at Navan in October before a subsequent win at Galway.

"He had all that time off and came back as good as he ever and for this to happen is just incredible," added Meade

During his career, he earned £319,000 in prize money, including victories in the Christmas Hurdle at Kempton and the Fighting Fifth Hurdle at Newcastle three years ago.