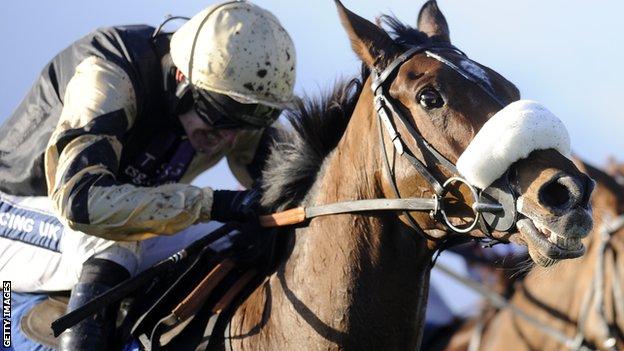 The enigmatic 11-year-old, trained by Paul Nicholls, signed off last season with victory in the Bet365 Gold Cup at Sandown in April.

He then won on his return to action at Wetherby earlier this month.

Earlier, Nicholls will hope Big Buck's can secure his 18th consecutive victory when he bids to win the Long Distance Hurdle for the fourth year running.

The brilliant stayer has been unbeaten since unseating jockey Sam Thomas in the Hennessy four years ago.

Tidal Bay, the mount of Ruby Walsh, will be looking to give Nicholls a fourth Hennessy triumph following the victories of Strong Flow in 2003 and Denman in 2007 and 2009.

The champion trainer also saddles Harry The Viking, who will be ridden by Daryl Jacob.

Ante-post favourite Bobs Worth lines up for Nicky Henderson and is joined by stable companion Roberto Goldback.

Last year's winner Carruthers will defend his title, while Diamond Harry aims to regain the title he won in 2010.

Other major contenders include Teaforthree - ridden by Tony McCoy - The Package and Hold On Julio.

Timmy Murphy was set to ride The Package for trainer David Pipe but will be replaced by Tom Scudamore after taking a heavy fall at Newbury on Friday.

The three withdrawals from the confirmation stage were Junior, who instead runs in the Rehearsal Chase at Newcastle on the same day, Planet Of Sound and Tatenen.