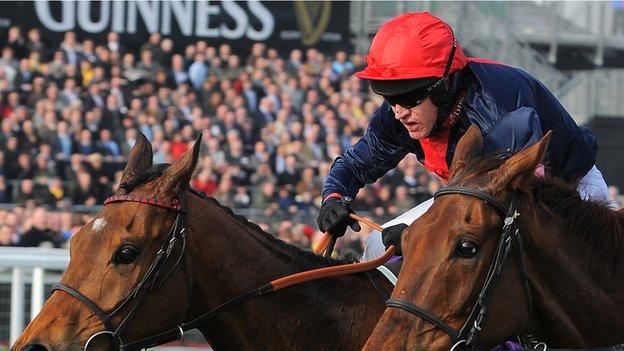 Barry Geraghty rode a perfectly-judged race on board Bobs Worth as the pair stormed to Hennessy Gold Cup success.

The Nicky Henderson-trained 4-1 favourite stayed among the pack before moving to fifth with five fences to go.

First Lieutenant looked set for victory with two to go, but Bobs Worth nudged ahead by the last and won by three-and-a-quarter lengths.

"He's not overly big - you can't ask too many questions of him," said Geraghty.

"I bought him as a yearling then Nicky bought him from us [Geraghty and his brother] when he was a four-year-old."

I enjoyed it immensely, especially when he jumped the last

Big Buck's, trained by Paul Nicholls and ridden by Ruby Walsh, won his 18th race in succession with victory in the Long Distance Hurdle.

The nine-year-old 12-1-on shot is now unbeaten in the last four runnings of the race. He finished ahead of 33-1 Reve De Sivola, with Fox Appeal third.

The winning run of Big Buck's started at Cheltenham on New Year's Day in 2009. He overtook the previous record of consecutive wins of 17 held by Sir Ken in the 1950s.

At Newcastle, the 10-11 favourite Cinders and Ashes was beaten into second by fellow Cheltenham Festival winner Countrywide Flame.

The John Quinn-trained horse won by 12 lengths to stake an early claim for the Champion Hurdle.

"This year he has improved a stone on the flat and he had to improve a stone over hurdles to be a real Champion Hurdle horse - looking at that you'd say he has improved," said Quinn.

"It was great. I enjoyed it immensely, especially when he jumped the last. There's the Christmas Hurdle at Kempton and I've also put him in the Istabraq Hurdle at Leopardstown on 29 December. That's a possibility."