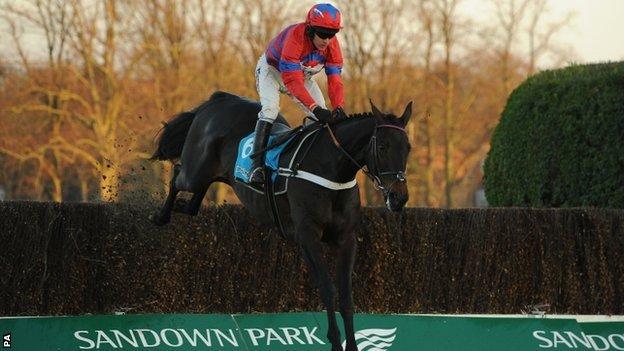 Sprinter Sacre eased to victory by 15 lengths in the Tingle Creek Chase to extend his unbeaten run over fences.

The 4-11 odds-on favourite was barely troubled once he and jockey Barry Geraghty went past the front runner Sanctuaire with three fences to go.

He's the most natural I have ever ridden and so far, so good

The winner, trained by Nicky Henderson, is the odds-on favourite for the Queen Mother Champion Chase at the Cheltenham Festival in March.

At this year's Cheltenham Festival he was a seven-length winner of the Arkle Chase having beaten his elders in the Game Spirit Chase at Newbury in February and followed it up with another impressive win at Aintree in April.

Henderson, who confirmed his charge will run next in the Victor Chandler Chase in January, said: "He has got the 'wow' factor. It's been a long time since Aintree and I admit to being petrified about Sanctuaire.

"I knew that horse had got pace and would put it into the race which would stretch anybody and it was as soft as our fellow would ever want to go on. But he's just class isn't he?

"I knew that I had something a bit special and I just wanted it to stay that way. That's as good a two-mile chase as you'll ever see."

He added: "He's the closest I have ridden to Moscow. Time will tell [if he will be as good] but he's going the right way. He's the most natural I have ever ridden and so far, so good."

At Aintree, the veteran Hello Bud (14-1) rolled back the years to win the Becher Chase for the second time.

The 14-year-old, who was successful in 2010 and running in the race for a fourth time, held off the challenge of Join Together to give trainer Nigel Twiston-Davies and his jockey son Sam an emotional triumph.

"He absolutely ran his heart out for me. He means everything to me. I just can't tell you just how much I love his horse," said the winning jockey afterwards.

"He's given us so much pleasure over the years. It's such an emotional moment."

Nigel Twiston-Davies admitted he was unsure about plans for Hello Bud for the remainder of the season.

"How can you really say retire when he obviously enjoys it so much," he said. "He kept going all the way to the line and as he jumped round there. He looked like a horse who was having a nice time.

"He is 14 and some people say retire, retire, but when horses are as happy as him what can you do? Why should we put them out in the field?"

Ballabriggs, winner of the Grand National in 2011, appeared to find top weight of 11st 12lb in testing conditions too much.