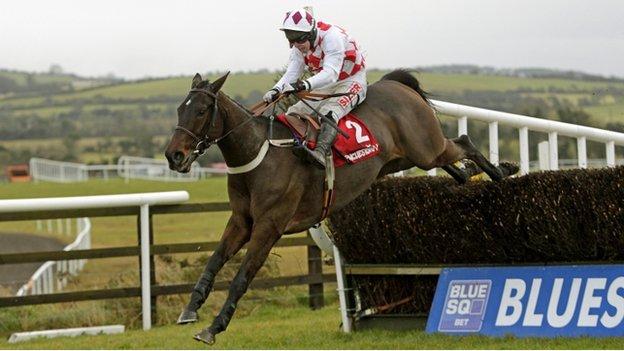 Jockey Andrew Lynch had his mount at the head of affairs throughout.

The win underlines the standing of Flemenstar and his trainer Peter Casey within current Irish racing folklore.

Not since Danoli rose from rustic Irish roots under the tutelage of his cattle farmer/trainer Tom Foley to win Cheltenham's Sun Alliance Hurdle (1994) has anything like this been seen.

On a raw County Kildare afternoon, crowds swarmed out of the warm grandstand bars to shiver three-deep around the winners' enclosure to catch a glimpse of their new heroes.

At the centre of it all was Casey, a diminutive, 70-something who lives on the border with Meath in Stamullen, with a turn of often four-letter phrases to send radio and television producers into apoplexy.

A post-race interview with Tracy Piggott on Irish television in January became an overnight internet sensation as the trainer graphically described how he planned to celebrate with wife Junie.

Jockey Andrew Lynch's decision to lead all the way on Sunday led to a few more expletives from Casey who insisted he was unaware of the plan.

Having jumped impeccably, Flemenstar, extending his winning sequence to seven, quickly asserted on the run to the second last fence.

Bookmakers have now got Flemenstar challenging for favouritism for the Gold Cup with Bobs Worth and according to Casey the plan now is probably a step up to three miles in the Lexus Chase at Leopardstown on 28 December before a Gold Cup prep race.

"He's so relaxed at home you'd think there was something wrong with him. He's like a 10-year-old now, you can do anything with him, while last year he was a bit giddy and he'll stay the three miles."

Asked about the Gold Cup, for which the horse is no bigger than 7-1, Casey grinned: "We're collecting the buses already. There'll be no buses left in Dublin, they'll all be in the boat bringing us to Cheltenham."

Flemenstar is owned by Stephen Curran, one of the few builders in cash-strapped Ireland to have much to smile about, and his eyes have been watering too at some of the huge offers for his horse.

Curran, however, is adamant that he's going nowhere. With feeling, he said: "There's no chance of selling. I'd die before he was sold."

If that all works out, there is little doubt who the stars of next year's Cheltenham Festival will be, though live interviews could be challenging for the producer with the bleeper.