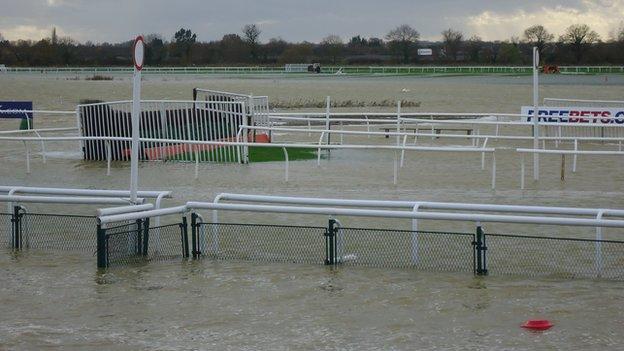 Thursday's Peterborough Chase at Huntingdon Racecourse has been abandoned because of a frozen track.

Ground staff at the Cambridgeshire course had managed to repair the surface after heavy flooding last month, but the cold conditions have made the track unsafe.

It means Huntingdon will be without the most high-profile day in its calendar.

"Ground frozen in places under covers with no prospect of improvement," read a Huntingdon statement.

It is the second consecutive meeting to be abandoned at the course, after racing on Saturday, 24 November was cancelled when most of the ground was under water because of floods.

The Peterborough Chase is the venue's most important meeting, both in terms of finances and prestige, and often attracts prospects for the Cheltenham Gold Cup and King George VI Chase.

The feature race was scheduled to include March's Gold Cup runner-up The Giant Bolster and Jonjo O'Neill's Albertas Run, who has won two of the last three Ryanair Chases.