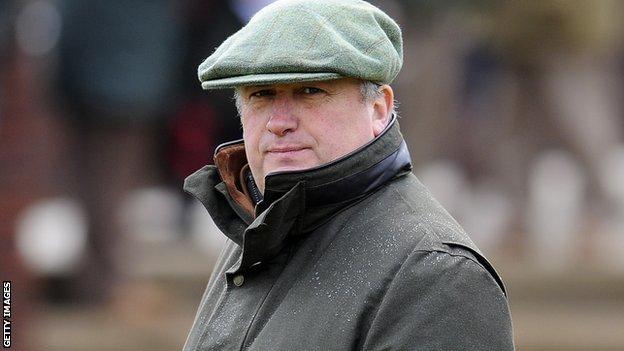 Trainer Paul Nicholls secured his fifth win of the day as Zarkandar won the International Hurdle at Cheltenham.

The first two are second favourites behind 2011 winner Hurricane Fly for the Champion Hurdle in March.

Nicholls said: "There's never a shortage of jockeys if Ruby wants Hurricane Fly [instead] but this horse will have reminded him of his ability."

Nicholls enjoyed three other winners at Cheltenham, as well as one at Doncaster.

After Unioniste triumphed in the handicap chase at Cheltenham, Nicholls said he was relieved to be among the winners after the controversial early exit from his yard of retired champion Kauto Star on Tuesday.

Kauto Star departed to begin preparations for a possible dressage career after a dispute between Nicholls and owner Clive Smith.

"It's been a stressful week," said the trainer. "I've never been so embarrassed about a situation that's developed. I feel really bad about it but it's just one of those things that happens.

"If it's offended anyone, I apologise."