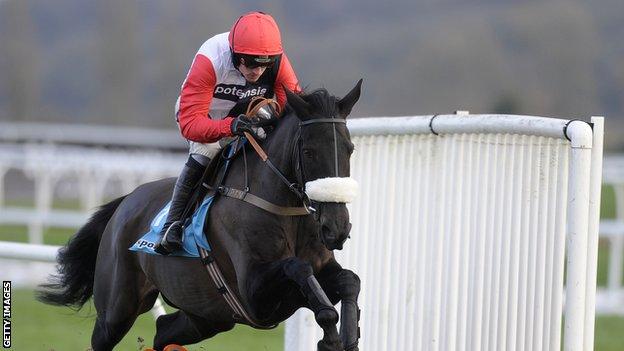 Record-breaking hurdler Big Buck's and steeplechaser Al Ferof are likely to be out for the season, according to champion trainer Paul Nicholls.

Big Buck's was due to go for a 19th consecutive victory in the Long Walk Hurdle at Ascot on Saturday.

He was also favourite to win a fifth World Hurdle at Cheltenham in March.

Al Ferof was second favourite for the King George VI Chase at Kempton on Boxing Day and a potential Cheltenham Gold Cup contender.

Nicholls said in his column for betting website Betfair: "I have some bad news to report.

"At evening stables tonight, we discovered a problem with both Big Buck's and Al Ferof.

"I am not in a position to go into great detail at this point, but I can confirm that Big Buck's will not be taking up his engagement at Ascot on Saturday and Al Ferof will not be running in the King George.

"And both are unlikely to run again this season."

Andy Stewart, owner of Big Buck's, told the Racing Post: "He has a tiny tear in one of his legs, so the best way is to let nature heal that.

"It's just a ridiculous coincidence that Al Ferof has something similar. We're all gutted but it's far too premature to talk about retirement."