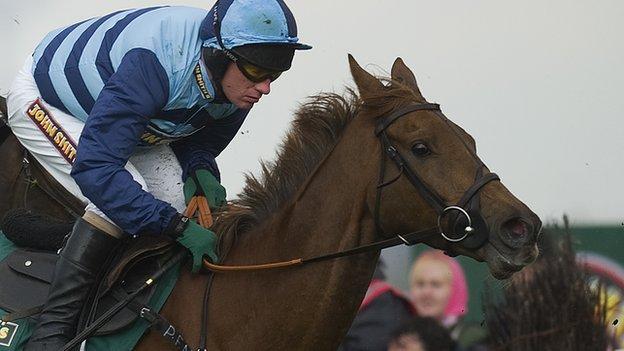 Christmas is a time for family, and a relative of one famous festive sporting star will be seeking to follow his sibling's success on Boxing Day.

The racehorse Kauto Star made the usually competitive King George VI Chase at Kempton his own as he won the race a record five times between 2006 and 2011.

After his retirement, the popular bay gelding will play a supporting role this time as he parades before the contest.

Meanwhile his half-brother, the chestnut-coloured Kauto Stone, is set to represent the same team of trainer Paul Nicholls and jockey Ruby Walsh in the race itself.

It might sound like victory is written in the stars, and Nicholls is hopeful the six-year-old can give him an eighth King George win.

"But he is a good horse in his own right - he has won two Grade One races in Ireland and another in France."

Kauto Stone has the same mother - Kauto Relka - as the former dual Cheltenham Gold Cup winner, and appears to be on the upgrade this season.

He fell at the first in the Queen Mother Champion Chase at Cheltenham in March, but was an impressive winner when returning at Down Royal last month just days after Kauto Star was retired.

With all this talk of Kauto Star and Kauto Stone, it's easy to get confused between the two.

But Kauto Star will always hold a special place in Nicholls' heart, perhaps explaining why he felt aggrieved when owner Clive Smith decided to remove him from the yard after retirement.

The trainer does not want to dwell on the 12-year-old's departure, and says he relishes working with up-and-coming stars.

Having won a race like the King George seven times, I ask him if he ever takes the success for granted.

"Never, never, ever. They all give you a buzz. Kauto Star was different and it was nice to go for the record but it never gets boring," he said.

"The King George has been a great race for us. It's been brilliant to do what Kauto did and a pleasure to have been involved with him.

"We have been incredibly lucky so far but we will always try to win another. It's a different challenge."

Kauto Star's only King George defeat came behind Long Run when the race was rescheduled in January 2011, before he turned the tables in December last year.

Long Run is favourite this time, with the Colin Tizzard-trained Cue Card and Nicky Henderson's Riverside Theatre, who is part-owned by actor James Nesbitt, among other potential challengers.

Nicholls says it is an open contest with the rain-softened ground suiting his runner and making the three-mile trip more demanding for rivals.

"If you look at his pedigree, he's bred to stay. He's an interesting horse, especially in soft ground. I think there's a lot of them that might not stay in those conditions," said Nicholls.

"Long Run is a thorough stayer if he can recapture his form. Cue Card is a super horse who could be a big danger, although there's a question if it's testing."

A good run in the King George could see Kauto Stone emerge as a Gold Cup contender, particularly with stablemate Al Ferof ruled out for the season earlier in December with a leg injury.

But Nicholls has other Cheltenham options, including Betfair Chase winner Silviniaco Conti.

"Silviniaco Conti has been awesome. He's done nothing wrong. I took him out of the King George because I didn't want him to have a hard race," said Nicholls.

"I want him right for the Gold Cup - that's our aim, We might run him in the Denman Chase [at Newbury in February], but that would be the only option."

And then there is the 11-year-old Tidal Bay, who has thrived since being transferred from ex-trainer Howard Johnson.

"It took a while to find out the best way to train him - little things you learn, it's hard to explain. He obviously wasn't quite right and we had to get him fit," said Nicholls

"He's done well, winning at Sandown and coming second in the Hennessy at Newbury He's in the form of his life and will go for the Lexus [Leopardstown, 28 December]. He'll definitely have an entry for the World Hurdle and the Gold Cup."