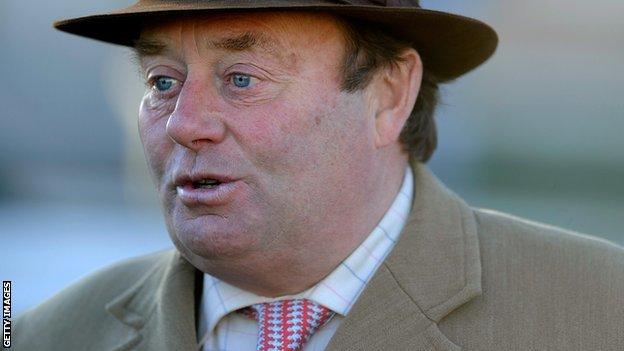 Trainer Nicky Henderson says victory in the King George VI Chase at Kempton has returned Long Run to the elite.

The gelding, ridden by Sam Waley-Cohen, beat Captain Chris by a neck on Boxing Day to win the race for a second time.

Henderson, 62, now hopes Long Run will become the second horse after Kauto Star to reclaim the Cheltenham Gold Cup after relinquishing it.

Horses who have reclaimed the King George VI Chase title

"Long Run is back where he belongs at the top of the tree," the two-time champion trainer told BBC Radio 5 live.

"He loves Cheltenham and I'd like to think he can improve on that again."

Henderson feels the seven-year-old, who finished second to Kauto Star in last year's King George VI Chase after winning in 2010, can win more Grade One races in the future.

"Yesterday's performance doesn't necessarily make him the world beater but he's still got it and he's still young enough to get back to where he was, which was the very, very top," he said.

Henderson hopes the Robert Waley-Cohen owned gelding will add the 2013 Cheltenham Gold Cup to his 2011 triumph.

"He was the best horse two years ago and at least he's reclaimed his King George. Now we've got to concentrate on getting it back at Cheltenham in March," he said.