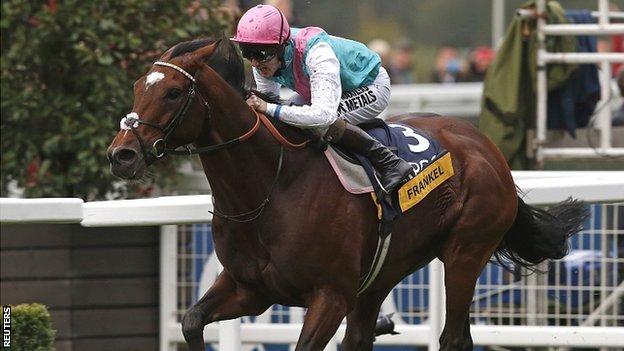 In a year during which racing certainly did its bit for the "great summer of British sport", there was no doubting who was overall star of the show.

The flawless sequence was completed in great style in the Champion Stakes on British Champions Day at Ascot in October, after which the colt was retired to stud.

Cecil said Frankel, whom he had already described as the outstanding horse he's ever seen, had been "a great help" in his own battle against stomach cancer.

Few could disagree about the magnitude of what Frankel has achieved.

The same applies over jumps to Kauto Star, though, as always, such a notion triggers debate.

Having ended 2011 with two unforgettable wins at Grade 1 level - his 15th and 16th - the horse was at the centre of an injury scare before going for a third Cheltenham Gold Cup in March.

The Paul Nicholls-trained star did get to the line-up ok, but was pulled up by Ruby Walsh, and such was his popularity, a huge roar of support went up from the crowd when the commentator announced the news.

Kauto Star was subsequently retired, and amidst considerable acrimony between Nicholls and owner Clive Smith, he is off to pursue a career in the dressage arena.

Talk now is of the "new Kauto" and centres on the hugely exciting Sprinter Sacre, a wide-margin winner of the Arkle Chase at the Cheltenham Festival.

The Gold Cup was won in storming style by Synchronised and the 17-time champion jockey AP McCoy.

Just a month later, however, the horse trained by Jonjo O'Neill for owner JP McManus, was one of two to die in a Grand National won in the tightest of finishes by Neptune Collonges.

The famous race and its fences again found themselves coming under considerable scrutiny, and that was not the only discomfort felt by racing in 2012.

Frankie Dettori, the sport's highest profile human star, was hit with a six-month ban after failing a drugs test in France for an officially unnamed illegal substance.

On his return, in May, Dettori will be riding as a freelance jockey after splitting with Sheikh Mohammed's Godolphin stable after being increasingly side-lined.

And difficult times for the business of racing were highlighted by the closure of Folkestone and Hereford racecourses, the first closures of long-established tracks in 30 years.

On a more upbeat note, Irish colt Camelot took the 2000 Guineas and Epsom Derby before only narrowly missing out on Flat racing's historic Triple Crown in the St Leger.

And while Frankel's Queen Anne Stakes win ensured Royal Ascot started with a bang, it finished on a further high thanks to Australian mare Black Caviar.

She emerged from a storm of hype to take the Diamond Jubilee Stakes trophy back Down Under, albeit only just after jockey Luke Nolen mistook the uphill nature of the final few strides.

Trainer John Gosden and jockey Richard Hughes, both amongst the winners at the Royal meeting, were champions of Flat racing for the first time.

Hughes' score included a record-equalling seven winners in one afternoon at Windsor in October.

For 2013, racing is resolving- almost certainly in vain- to find another Frankel and, more simply, it's hoping that the weather might be a little more accommodating.

Regardless of the serious loss of fixtures, too many big summer races were staged on unsuitably soft going. Things must be drier in the next 12 months - mustn't they?