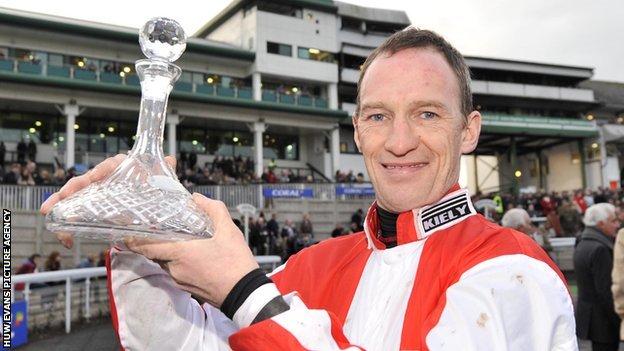 The 10-1 shot, ridden by Paul Carberry, beat the 3-1 favourite by half a length in a battle for the line, having trailed at the rear early on.

Monbeg Dude is owned by a rugby-based syndicate including Mike Tindall and James Simpson-Daniel of England and Welsh fly-half Nicky Robinson.

The race had been postponed because of bad weather on 27 December.

Teaforthree, ridden by Tony McCoy and trained by Wales' Rebecca Curtis, was in contention along with Giles Cross throughout the testing race.

But Giles Cross fell off the pace in the home straight while Monbeg Dude made strong progress before getting ahead of Teaforthree in the dying stages.

The Michael Scudamore-trained horse remained in front to clinch a narrow victory.

Triggerman was 11 lengths behind in third with Arbor Supreme (33-1) fourth, while Giles Cross pulled up in the home straight.

Carberry said: "Tom Scudamore said to me I'd love him and to ride him like a non-trier and to just drop him in.

"I took a while to get the keenness out of him then he started jumping well.

"When I pulled him out I knew I had a good chance with four or five fences left.

"In fairness I probably got there a bit soon, but he kept going to the line, he gave me a great spin.

"It's my second ride for Michael, I got the call on Thursday.

"I haven't had the opportunity to win this so it was about time I took it. This is great.

"I thought we were going a bit slow, but the rest were off the bridle."

Scudamore said: "We only knew on Thursday that Paul was going to ride him as that was when we heard Jamie Moore had to go to Sandown.

"There was a question of where we would go after he won at Cheltenham, my dad [Peter Scudamore] and all the owners wanted to come here.

"But I wanted to go back to Cheltenham on New Year's Day as I thought this might be too big an ask for the horse.

"It was an interesting discussion, but dad said we were going to the Welsh National, that there was only one place to go and obviously I'm delighted we did."

Monbeg Dude has been introduced by bookmakers at 33-1 for the Grand National at Aintree in April, while Teaforthree remains at 20-1.