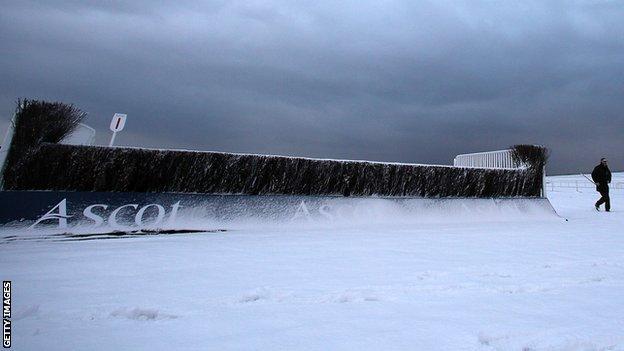 Ascot's meeting on Saturday, in which Sprinter Sacre was set to run in the Victor Chandler Chase, has been abandoned because of the bad weather.

The race has been moved to Cheltenham on Saturday 26 January after heavy snowfall in Berkshire.

The only fixture that beat the snow was on the all-weather track at Kempton in what is the only meeting in Britain.

Leicester on Tuesday is off, and fixtures at Wetherby and Catterick next week are among those already in doubt.

The fixture had been scheduled to feature the Peter Marsh Chase, and a Champion Hurdle trial which will now be run at Doncaster on 26 January.

Saturday's cards at Taunton and Lingfield were also called off.

At Ascot, Sprinter Sacre was due to face Sanctuaire again after beating the Paul Nicholls horse by 19-and-a-half lengths in the Tingle Creek Chase at Sandown in December.

Seven-year-old Sprinter Sacre, who has been described by trainer Nicky Henderson as "his big black aeroplane", is hot favourite for the Queen Mother Champion Chase at Cheltenham in March after winning all six of his races over fences.