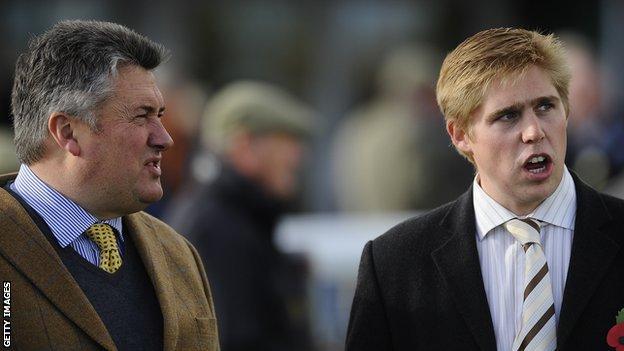 Dan Skelton is to leave his position as assistant to champion trainer Paul Nicholls in May.

The 27-year-old has spent nine years as Nicholls' right-hand man.

He will now set up on his own at his Olympic gold medal-winning rider father Nick's farm in Warwickshire.

"This was not an easy decision but after a lot of thought and discussion I have decided that in May 2013 I will embark on gaining my trainers' license," he said.

Over his time at Ditcheat, Skelton has worked with the likes of Kauto Star, Big Buck's, Neptune Collonges, Master Minded and Denman.

"The hardest part of this decision is no doubt the fact that I will be leaving a great team, and a great boss who, at the age of 19, welcomed me into full-time employment and the full-time excitement of National Hunt Racing," he added.

"Paul showed me great confidence and faith when taking me on as assistant with no experience, and has nurtured me into the person and professional that I am today."

"There was never going to be an easy time to leave Ditcheat, and my wife Grace and I cannot thank Paul, Georgie and the Barber family enough for having us.

"We are very excited about our future and I hope I can do justice to the training and education that I have received from Paul."

Nicholls wished Skelton all the best for the future and named his current pupil assistant trainer Tom Jonason as his successor.

"Late last week, Dan spoke openly with me about his plans for the future," Nicholls said.

"After our discussion, Dan wanted to, and will, stay in his current job and maintain his role as assistant until the end of the season.

"I obviously wish Dan all the best in the future. He is a great friend above all else, and I am incredibly proud to have played a part in Harry Fry's and Dan's progression to the training ranks."

Skelton expects to have his first runners in the autumn and his jockey brother Harry is set to play a part in the team.