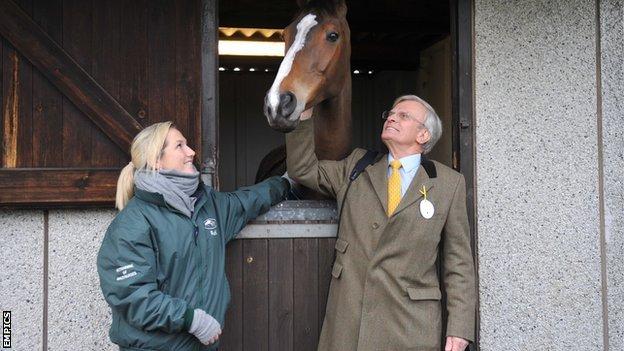 "If he takes to it as well as he has done so far then he can make a big impact in dressage," Collett, 23, told BBC Somerset.

"It's a huge step for everybody, including everyone in the dressage world, to have a horse racing legend having a go at their sport.

"But if he can do well then he'll be leaving two legacies - one in racing and one in dressage."

Along with his triumphs at Kempton Park, Kauto Star is the only horse to have regained the Cheltenham Gold Cup having lost it.

Owner Clive Smith had indicated a switch to dressage was in the pipeline, but the change came earlier than expected, a move which strained the relationship between Smith and Nicholls.

Despite the upheaval of moving yards and the switch of disciplines, Collett insists Kauto Star is prospering in his new environment.

"His whole way of life is different now. He's in a small, quiet yard and everything is down a level; there's nothing that is any relation to racing at all.

"He's settled in really well and seems to be happier with his quieter life.

"He's a very switched-on horse and he needs something to keep his brain occupied otherwise he'd get bored.

"He's a very intelligent horse and we are very happy with his progress so far."