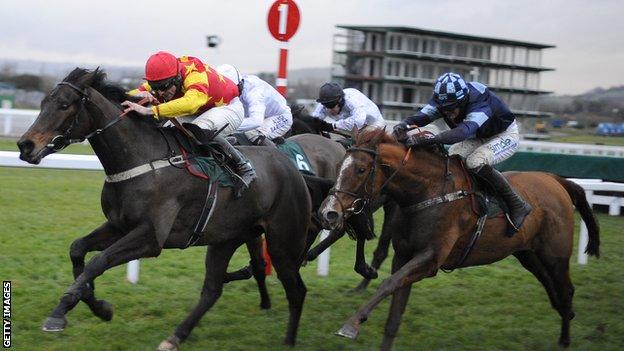 Tucked away in the Brendon Hills, high up on Exmoor, the village of Brompton Regis would make a perfect lair for any Goliath secretly readying himself for the next big challenge.

This is wild, rural south western England at its most unspoiled, 300 metres above sea level, and secluded, especially when the winter weather rolls in.

Yet from Higher Holworthy Farm, National Hunt trainer Jeremy Scott is emerging as more of a David, a notable giant-killer in a sport increasingly dominated by the big boys.

Many of the principal prizes are falling to the star-studded strings of trainers Paul Nicholls and Nicky Henderson; even their closest rivals Donald McCain and David Pipe get only the occasional look-in.

For everyone else, the going gets harder and harder.

Scott, however, has managed to compete, famously gaining a first win at Grade One level when defeating two Henderson runners with Melodic Rendezvous in the Tolworth Hurdle at Sandown.

When I had 150 cows, snow was a major problem because you couldn't get the milk out, and there was no income, so you have to be ingenious and work around it

The horse is now to have one prep race before facing more opposition from the Henderson and Nicholls camps in one of the novices' hurdles at the Cheltenham Festival in March.

"Hopefully being an underdog adds to our appeal," said Scott. "It's part of the British psyche to support the underdog, and that's what we are against them.

"If our horse was running in those trainers' names, he'd be pretty near favourite for Cheltenham.

"It is slightly worrying when so much that runs well is snapped up by the big owners and trainers, but it's what's happening and that's it."

Melodic Rendezvous, a well-named son of the stallion Where Or When and the mare Vic Melody, was racing for only the fifth time when winning at Sandown, ridden by Nick Scholfield.

A late developer of a horse, Scott and his point-to-point trainer wife Camilla were convinced that if given time, he could and would add to the stable's growing fortunes.

"The breeders were very patient," he said, "and weren't in a tearing hurry, and that was the secret.

"It was nice to have that luxury because we all probably chuck away too many decent horses, or get disappointed by them, because we don't give them time.

"The previous year [to starting his career in 2012] Melodic was physically the wrong shape, but he started to bloom when he won his bumper in March."

Like the rest of the Scott string, Melodic Rendezvous and fellow Festival hopeful Empiracle, the winner of his only race to date, have been training in deep snow this winter.

"It's been interesting with four or five foot drifts," explained Scott who cut back on a dairy farming operation to concentrate on racehorse training.

"When I had 150 cows, snow was a major problem because you couldn't get the milk out, and there was no income, so you have to be ingenious and work around it.

"We're doing the same with the horses. They've been ridden every day, wading through a foot of snow. It's hard work but good for them. They won't have lost any fitness."

With a best ever seasonal total looking certain, and the possibility of cherished Cheltenham Festival success, Goliaths beware, this David is on the warpath again.