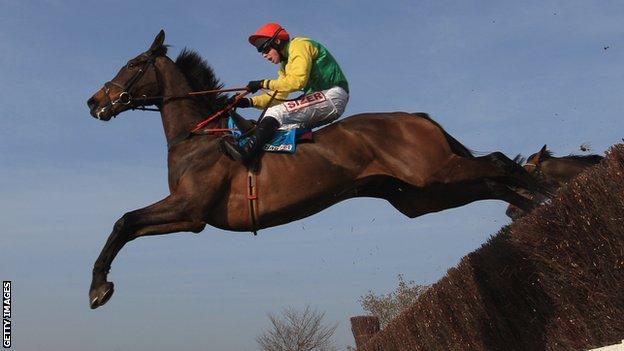 Henry de Bromhead's classy 11-year-old has now won all four starts this winter after disposing of the gallant Foildubh, who came in second.

Andrew Lynch made all the running on the 1-8 shot and only Foildubh could keep tabs on him, flattering briefly before falling back at the second last.

Sizing Europe had missed the King George VI chase at Kempton in December.

The 2011 Queen Mother Champion Chase winner was ruled out of the Boxing Day showpiece because of the rain-softened ground.

Sizing Europe was runner-up in the two-mile race at the Cheltenham Festival a year later and may compete again this year.

"It was a bit of a slog and he did what he had to do," said de Bromhead.

"He just looked very idle on ground that he wouldn't be mad about and his jumping was OK."

"It hasn't really made any difference to where we'll go at Cheltenham - I'd say the Gold Cup is the outsider of the three options and we'll just see how everything unfolds," added de Bromhead.

The horse's winning margin on Sunday was 10 lengths at a course where he had already recorded six of his 18 career wins.

Meanwhile Overturn, one of the favourites for the Arkle Chase at Cheltenham, won the Scottish Arkle Novices' Chase at Musselburgh.

The 1-5 favourite came home ahead of Tetlami, ridden by Barry Geraghty.