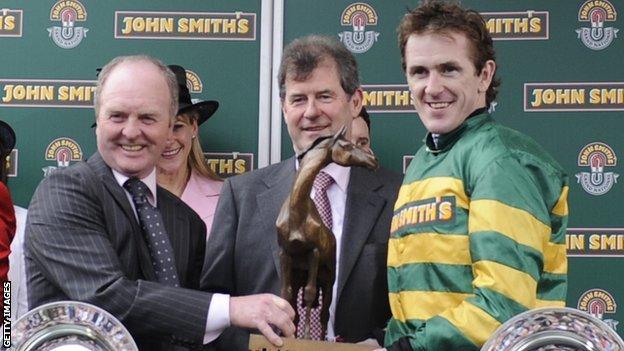 A different breed - the life of a jump jockey - BBC Radio 5 live special is available as a podcast.

There is a huge trophy cabinet in AP McCoy's house that groans underneath all the silverware he has won during his record-breaking career as a jump jockey.

I started peering at the various cups, including his 2010 BBC Sports Personality of the Year Award won after his emotional Grand National victory aboard Don't Push It.

"Oh, this is only a fifth of the trophies," he says without a hint of arrogance. "The rest are somewhere else."

McCoy's fierce will to win is well documented but there was a chilling simplicity to my question about his desire to extend his record of being champion jockey to 18 seasons.

"I have to be champion jockey," says the 38-year-old Northern Irishman.

I spent a day with McCoy last month, going out on the gallops with him at Lambourn in the morning and then travelling with him to Ffos Las for his five rides in the afternoon.

I deliberately chose a run-of-the mill card on the racing calendar as I wanted to see if the fire burnt as fiercely on a soggy Tuesday outside Llanelli as it does on Cheltenham Gold Cup day under the shadow of Cleeve Hill.

I think you know the answer already.

After drawing a blank in the first three races, on very heavy ground, he walked out for his fourth ride, in the familiar colours of JP McManus, and said to us: "Not a great day so far." But then he duly won on a 9-2 shot that some of us had picked off at 9-1.

Having covered football for two decades, I am used to seeing rose petals being thrown in the path of those on £100,000-a-week.

But while there is obvious huge respect for AP McCoy, there is no standing on ceremony for him - nor does he demand it.

He knows he is lucky to be able to have Arnie, his driver, to ferry him to meetings, but, noticeably, he was the first jockey to Ffos Las and the first into the sauna before the day's racing.

Then, of course, there is the greatest leveller of all - children.

They are not fussed whether you have won the Gold Cup or been beaten in all five races. They just want some time with daddy when it is possible.

BBC Sports Personality of the Year 2010

On our return to the McCoy household, daughter Eve wanted a story. She clearly has her dad wrapped round her little finger and they skipped off together for a bedtime story before AP's wife, Chanelle, kindly made us cottage pie and broccoli which the champion jockey also tucked into. He would not eat every night, but he did on this Tuesday evening.

McCoy's obsession for winners, the relentless pursuit of notching up another success - like Casanova with women - is evident to anyone who has spent time with him.

And as yet there is no sense it will end soon, although Chanelle admits with disarming frankness: "When he does retire, it will be like a death in the family."

But for every McCoy there are jockeys like Conor Quish, combining his stable lad's work with a few rides here and there.

And there is Sam Thomas, who has known the thrill of winning the Gold Cup on Denman in 2008 and who is now desperate to recapture that feeling.

I spoke to a range of jockeys to hear about travel, diet, sacrifice, money, camaraderie, hopes and dreams; and, of course, injury.

I went to Oaksey House, where injured jockeys receive rehabilitation and wonderful care, to hear from Peter Toole and Isabel Tompsett, who both suffered very serious, near fatal falls.

Their stories are powerful, honest and totally without bitterness

McCoy himself admits he has been lucky to avoid serious injury on occasion.

"From the first day I've been riding, I've convinced myself I'm unbreakable," he said. "The amount of times I've been in the ambulance it is obviously not true.

"I kind of think I'm like a cat with nine lives sometimes."

"One of the things I've said I will do when I do retire, which hopefully won't be for a while, is I'm going to get myself a new set of teeth."