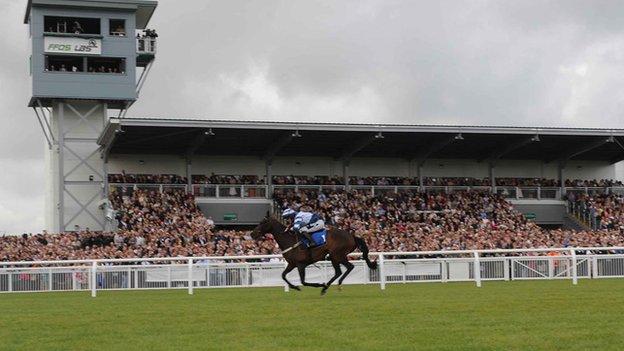 The owners of Ffos Las race course might consider moving the date of their most prestigious race to avoid clashing with Six Nations rugby in future.

Fewer than 2,000 spectators attended the running of the Welsh Champion Hurdle, which clashed with the Wales v Ireland rugby match on Saturday.

The figure was more than 400 less than the previous running of the race in 2011.

"We'll consider all our options," said clerk of the course Tim Long.

"I think we'll start to digest what we've learned from Saturday, and if there is anything we can do to make it more attractive for people to come racing."

Two of the races at Ffos Las last Saturday were televised by Channel 4, and Mr Long said they would discuss their options with the television company and sponsors.

Those may include shifting the time of the race so it is not run while play is going on in a Six Nations game.

"All those things can be considered, but the key thing here is we've had a successful day's racing and we have the opportunity to build on it in future," said Long.

The race did not take place in 2012 when the fixture was abandoned because of frost.

There was no clash in 2011 as Wales played rugby on the Friday evening before the Champion Hurdle was run.