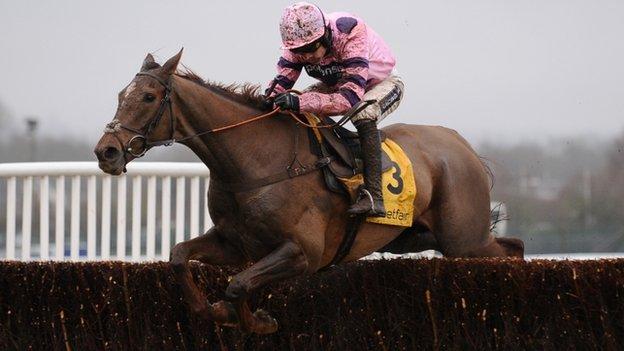 Silviniaco Conti cemented his status as a Cheltenham Gold Cup contender with victory in the Betfair Denman Chase at Newbury.

Ruby Walsh bided his time on the odds-on (8-11) favourite, before moving into the lead three fences from home.

Meanwhile, Sir Des Champs beat Flemenstar in the battle of the Irish Gold Cup challengers in the Hennessy Gold Cup in Leopardstown.

Sir Des Champs took the lead at the turn for home and held on to win.

It was revenge for last year's Jewson Novices' Chase Festival winner, who had finished second to Flemenstar at Punchestown in December, before also finishing behind his rival in the Lexus Chase at Leopardstown.

Saturday's results and performances mean that Sir Des Champs and Silviniaco Conti's odds are cut and they are second and third favourites behind Bobs Worth for the Gold Cup at Cheltenham on Friday, 15 March.

Flemenstar was held up for much of the race by jockey Andrew Lynch and participation in the Gold Cup is now in doubt and he could instead be aimed at the Ryanair Chase.

Silviniaco Conti has already looked impressive this season with victory in the Charlie Hall Chase at Wetherby, and beating Long Run in the Betfred Chase at Haydock. He continued his good form to finish ahead of last year's Gold Cup second The Giant Bolster (6-1) and Menorah (7-1) , much to the delight of Walsh and trainer Paul Nicholls.

"Through the race he travelled well and jumped well. He quickened up and did well for a horse short of full fitness on quite testing ground," said Walsh.

"Paul has not got him fully wound up. He has one race in mind. If he improves as much from the Charlie Hall as he did to the Betfair Chase he will run a big race in the Gold Cup.

"He's a gem. He's got plenty of scope. There's lots to like about him."

Nicholls added: "I said he wouldn't be fully wound up today, you wouldn't expect him to be. It was just what we wanted. He galloped well and stayed on strongly.

"It's on to Cheltenham now. He's done everything right. He's won a Betfair, he's won a Charlie Hall and he's won this now.

"He's a young improving horse. Let him do the talking."

Meanwhile, the 5-1 favourite My Tent Or Yours recorded a poignant success for owner JP McManus, trainer Nicky Henderson and jockey AP McCoy in the Betfair Hurdle at Newbury, just five days after their star hurdler Darlan died in a fall at Doncaster.