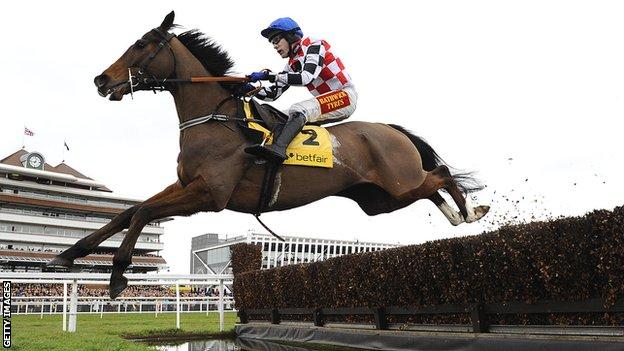 The horse that finished second in last season's Cheltenham Gold Cup is, in contrast, a runaway winner in any racing-themed staging of the TV game-show Call My Bluff.

In fact, we performed our version on BBC Radio 5 live during the build-up to last season's staging of national hunt's principal feature. Subject: The Giant Bolster.

True or bluff, is he/she/it a) a monster wave which surfers fear off Darwin, Australia; b) a bragging, self-made Canadian millionaire; or c) a mythical, people-eating Cornish ogre.

Responses came flooding in, many from Cornwall, where the legendary figure, after which owner Simon Hunt did indeed name his equine pride and joy, is still celebrated to this day.

Hunt, a County Durham-born engineer in the construction industry, based now in Northampton, is a regular holiday-maker at St Agnes, on the north Cornish coast.

He said: "Bolster terrorised the villagers, and they have a Bolster pageant in May and a huge puppet of him, with someone inside, leads up the carnival in August. It's great.

The Giant Bolster and Wyck Hill are almost inseparable at the yard - they are stabled next to each other, just like Kauto Star and Denman were at Paul Nicholls

"I thought he'd make a brilliant name for a racehorse, and maybe that's part of why he has legions of supporters. In the Gold Cup, he was a 50-1 outsider, but half of St Agnes was on each-way."

Runners-up spot at Cheltenham, behind Synchronised, but in front of defending champion Long Run, was itself a gigantic performance by the eight-year-old, trained by David 'Bridgy' Bridgwater.

Having been a promising youngster, who finished a close sixth in an outstanding novices' hurdle won by Peddlers Cross, his jumping used to give cause for concern in steeplechases.

However, after work with jumping specialist Yogi Breisner, the horse really started to flex his muscles, hardly putting a foot wrong when successful in a prestigious race at Cheltenham last January.

Subsequently, he ran with credit behind Long Run at Newbury in February, but still some refused to believe his run in the Gold Cup was anything other than a lucky fluke.

"Was it a real surprise to us?" said Hunt. "Well, we knew he had it in it him, specially when I spoke to Bridgy on the phone a week before, and he could hardly get the breath.

"The horse had done such a brilliant bit of work [on the gallops] that he said 'I can't see him being out of the first two, and Long Run won't beat us'.

"I don't know: if he never does anything again, it was a great day for him and for us, but I'm sure it wasn't just a flash in the pan."

At Bridgwater's growing 40-horse operation, located in the heart of the Cotswolds, only a few miles from Cheltenham, The Giant Bolster's season has revolved around a return to the Gold Cup.

However, his most recent race, when pulled up in the King George V1 Chase at Kempton - "a bad day at the office," according to Hunt - has to be put down as disappointing.

A bounce-back will be attempted, probably in Saturday's prestigious Betfair Denman Chase at Newbury, in which he was fourth last year, though a race at Warwick is an alternative.

Bridgwater, a successful jump jockey and for a time number one rider to retired 15-time champion trainer Martin Pipe, is also eagerly awaiting news of the weights for the Grand National.

Up and coming steeplechaser Wyck Hill, the winner of his two most recent races, valuable prizes at Wetherby and Ascot, has Aintree on 6 April firmly in his sights.

"The Giant Bolster and Wyck Hill are almost inseparable at the yard," said Hunt. "They are stabled next to each other, just like Kauto Star and Denman were at Paul Nicholls'.

"How good would it be if they could become Bridgy's Kauto and Denman? Fantastic."

Meanwhile, the Hunt family's admiration for the St Agnes area has again been demonstrated in their latest horse, Bawden Rocks, also in training with Bridgwater.

For the purposes of future Call My Bluffs, the four-year-old shares its name with two rocks a mile out to sea, hurled there, as legend has it, by, you guessed it, the Giant Bolster.